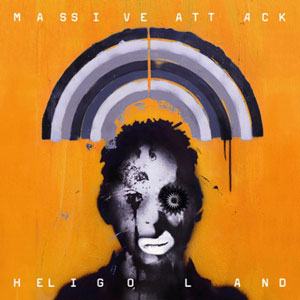 Massive Attack have made some momentous albums in their time, and people have come to expect momentousness of them. Inevitably this means that each album, when it arrives, sounds more anxious and burdened than the last. God knows they don’t exactly rush them out – their latest, Heligoland, comes a full seven years after their last, 100th Window – but that’s part of the charm.

There’s no denying that the group’s years of game-changing innovation are behind them. It’s not that they’ve slowed down, it’s just that the rest of the world has caught up. Blue Lines (1991) and Mezzanine (1998) remain the band’s most powerful and original statements, each – in  completely different ways – radically expanding the lexicon of “pop” music writing, performance, arrangement and production. To expect the same again would be ludicrous.

100th Window, effectively a 3D solo album, was met with apathy by a lot of fans and critics, but hindsight shows it to be a more brave and singular effort than it was given credit for, its Pro-Tooled hymning of paranoia and isolation in the digital age actually very effective and affecting. For Heligoland, D is reunited with Daddy G, and a roll-call of guests that reflects the band’s almost royal reputation among musicians and music-lovers of a certain age.

What Heligoland lacks for me is any great sense of the unexpected. Mezzanine, Blue Lines, Protection and even 100th Window were impossible to predict from bar to bar, and every sonic whiplash of malevolence would, or at least could, give rise to a sweet caress. You didn’t know where you stood, and it was great; violence and tenderness, beauty and ugliness, went hand in hand. Here, on Heligoland, there’s less nuance; the mood is more consistently sullen.

‘Psyche’, sung by Martina Topley-Bird  is perfectly nice, but it’s played a little too straight –  there’s not much to distinguish it from a good track by, say, Feist or St Vincent. The Hope Sandoval-voiced tracks are less generally convincing: ‘Paradise Circus’ is one-dimensional, ‘Babel’ sounds like a noughties session band trying to imitate the skittering IDM of Squarepusher or Aphex Twin (and the agreeably sultry vocals can’t save it). ‘Splitting The Atom’, with its Specials-esque seaside skank, is oddly satisfying, though anyone who hasn’t grown up with the distinctive vocal mannerisms of 3D, Daddy G and Horace Andy may find it all a little perplexing.

Andy doesn’t sound quite himself on ‘Girl I Love You’; it’s the most ‘pop’ and least ‘reggae’ performance I’ve ever heard from him. One of the most dynamic and cinematic songs on the record, perversely ‘Girl I Love You’ sounds more 90s than anything than Massive Attack ever made in the 90s. TV on the Radio’s Tunde Adebimpe guests on reassuringly epic opening track ‘Pray For The Rain’, and ‘Flat of The Blade’ sounds immense – fetid, minimal digi-funk, carved up by low-flying strings and stately, oxygen-deprived brass. Being something of an irrational Elbow hater, it’s not lightly that I say Guy Garvey’s voice works well here (though there’s no way I can let that “I’ve got skills I can’t speak of” lyric pass). Were it not for the lack of a heart-thumping third act, then ‘Flat of The Blade’ might have been one of the all-time great Massive ballads.

‘Rush Minute’ is depressingly conventional, Del Naja’s nasal vocal riding a guitar, piano and drum pulse that’s less Radiohead and more Fujiya & Miyagi. Damon Albarn’s ‘Saturday Come Slow’ is classy enough, but there’s nothing particularly Massive Attack about it; it could’ve just been a strong track on Blur’s 13. ‘Atlas Air’ harks back to the sing-song hip-hop of ‘Five Man Army’ and ‘Mezzanine’ and it works pretty well, climaxing with a wriggling, electro-style arpeggio that’s possibly the album’s most exuberant flourish.

Heligoland is a cumulative work; if you break it down, as I have, to individual tracks, then it suffers. Taken as a whole, listened to in sequence, it’s very rewarding indeed. Of course it suffers by comparison with the group’s most iconic work, but then so would pretty much anything. Try to approach the album with fresh ears, without the burden of what’s come before, and you’ll see it for what it truly is – a flawed but highly creditable pop epic of rare range, ambition and attention to detail.