Matt Cutler is… a Lone in the dark

The solitary, recondite vision of Nottingham’s Matt Cutler, aka Lone, is one swathed in the half-forgotten, sepia-stained memories of youth.

Though his previous album for Dealmaker, 2008’s Lemurian, revealed a singular talent, and worked soporific hip-hop beats into a woozy, post-Dilla signature plod, his recent, revelatory long-player Ecstasy and Friends (out now on Werk Discs) is a different animal indeed.

Antique arcade games, dusty hip-hop beats and ’80s rare grooves are the backdrop to a record steeped in happy-sad, melancholic nostalgia, sampladelic undercurrents, and synth-heavy machinations; it’s also spiked with a serious side order of psychedelic, mind-mangling strangeness. A serious evolution from the wonky school of production favoured by Flying Lotus et al, Lone has been compared to Boards of Canada, but really sounds like no one else.

Fact decided to delve a little deeper, and discover what makes him tick.

How did you first get into music and realise you wanted to make it?

“It would have been when I was about nine years old, it was the first time I heard music that I thought was good. Up until then I thought all music was crap. I don’t think I liked any of it.

“But then I heard this hardcore stuff that my sister and her mates were into, and because that sounded like computer game music, it was like Streets of Rage for the [old Sega games console] Megadrive, it reminded me of that. And then I got stupidly obsessed with it. And I had this little toy keyboard that I’d try to recreate bits of the tunes, and record ‘em on to tape. A few years later, I got into it a bit more, got a computer and stuff, and from 14 years old onwards it started to get a lot more serious, I was starting to make whole tunes myself.”

Why the name Lone?

“The original idea was that I do that music, and no-one else is allowed in. It’s to do with being really bored and living a while away from my friends, and having that thing that kept me occupied, rather than going out. It’s a bit of a lonely thing!”

Where does the album title Ecstasy and Friends come from?

“I guess from moving into the city. With the last one, it was like a concept album – which sounds a bit horrible! – but it was an idea about a certain thing. With this one, I got signed to Werk Discs, and I thought I needed to come up with a theme, and it was staring me in the face that the actual events in my life, living with my friends and stuff, influenced me loads.”

And all the rest…

”Yeah, but with the ecstasy thing it’s not necessarily about the drug – I wanted to make the happiest music I could possibly make. It needed some word like joy, and ecstasy seemed to fit.”

The album has a heavy ’80s boogie/rare groove influence, with the samples you’ve chosen and the choice of synth sounds. It’s also very psychedelic, and a lot of that 80s electrofunk has a very trippy edge to it that people rarely seem to talk about. Is that something you’re interested in exploring?

“Totally. That music came a lot earlier to me than hardcore and jungle. My parents used to play ’80s funk in the car, and I thought it was shit at the time! But thinking about it now, it’s soaked into my subconscious somewhere, and when I go back to a lot of the music that they were into, it’s got that woozy, hazy feel to it. I don’t know how intentional it was, maybe it was the studios the artists were working in, but what I’m doing is definitely a dreamier, warped vision of that stuff, drawn from memories.”

There’s a bittersweet nostalgic quality to the record, redolent of childhood, with a track called ‘Arcade’. Some of the record reminded me of the Outrun [Sega car racing game] soundtrack. Is that a feeling you wanted to evoke?

“Yes, there’s palm trees in the background of that game, as well (as there are on the cover of the album). It all ties in really, childhood stuff. Listening to the electronic funk, and playing an arcade game at the same sort of time. You picked up on the hazy memories, and there’s a tinge of regret in the music too, because the older you get, you forget it more. Desperately trying to hold on to it, I think.” 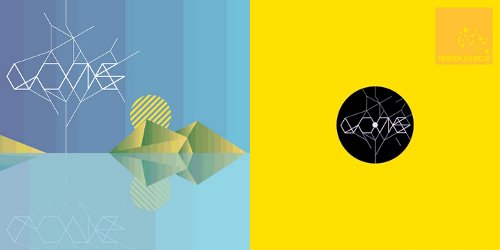 To what extent do you mix samples and synths? How do you go about it?

“It’s done with computers, but I’ll sample a synth break, rather than a drum break, where there’s just a chord on its own, and then take that out, load it into the sampler, and have it as its own key. That goes back to the hardcore thing, a lot of the rave tracks, they’d sample one chord, and then make a melody out of it. It sounds wicked, and kind of weird. Then I layer it up with my own synths, make it hard to identify, try to mask it, basically.”

How did you hook up with Werk Discs?

“I finished Lemurian, and after that, I sent a couple of tracks to Darren Cunningham [aka Actress, co-owner of Werk Discs], and he said he’d be up for doing a 12” or a 7”, without any talk of an album. We kept in contact and I was sending him tracks that whole time, and it turned into doing an album.”

Who are some of your all-time favourite artists?

“Aphex Twin was one of the first people I got into after the rave stuff. His approach sounded quite wrong, it sounded like someone in their bedroom. That blew me away and revolutionised it a bit for me I think. I got into hip-hop a bit later, Wu Tang, De La Soul, Madlib, and all that kind of thing.”

Do you see your music as being rooted in hip-hop or something separate?

“Primarily, that’s what it is. I’m going to try as many styles as possible, but I’ll always produce in the way that I like to hear a hip-hop track produced. I keep that with me, I guess.”

When Lemurian dropped, people weren’t ready for that sound, but it’s a different musical landscape now. Do you feel an affinity with other electrofunk/ wonky hip-hop producers like Dam-Funk, Hudson Mohawke, Samiyam?

“Totally, Samiyam in particular, when I heard his stuff it was like, ‘shit, he’s doing exactly what I want my stuff to sound like’. In other words, really raw and woozy. I love all that stuff, Dam-Funk and Hudson are amazing, but I kind of want to get away from that stuff now, there’s so many people doing it. The new people seem kind of influenced by Flying Lotus, whereas for me, it was Wu Tang or Madlib, they’re the originators.”

It seems to be the case now that producers are making one style, and then moving onto something different to avoid being pigeonholed…

”It’s really exciting I think, there are a lot of people in the same frame of mind that I am. From here it could go literally anywhere. This year will be wicked, to see how people change.”

What’s next on the Lone agenda?

“I’ll be keeping the Lone name, whatever kind of style I do sounds like me now. I’ve got a couple of tracks, which I think are going to come out on Werk, kind of Detroit house tunes. Hopefully in the early part of this year.”