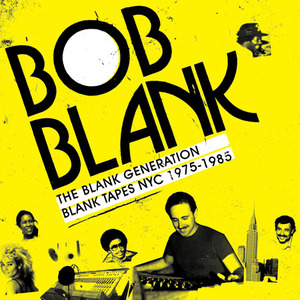 Blank Studios, Bob Blank’s off-centre studio on West 20th Street NYC was something of a hub for music both fantastic and vital. Due to its position and pricing, it acted as a touchstone for at estranged renegades: at first the early wave of Latinos making disco, the Salsoul label, then the Prelude label, which brought work with disco luminaries such as Patrick Adams, Greg Carmichael. Walter Gibbons and Leroy Burgess. Then came the experimental set, spearheaded by John Cale who brought in his wake the downtown New York scene, including Arthur Russell, Lydia Lunch and Sun Ra.

However, if you want a composite of all these things, then Blank’s work with ZE Records, including melodramatic disco exotics Aural Exciters and Kid Creole’s acerbic social commentary camouflaged as vaudeville is the work that seems to best link the common Blank Studios threads of inclusion and a sense of fun.

By its open nature the studio wasn’t rotted in a common aesthetic, and a lot of the music Blank produced and engineered has already been re-released for reappraisal, so this compilation functions best as a broad and brilliant cross-section of Blank’s customers – amongst them the early Latin disco of Charanga 76 divas such as Gladys Knight, Fonda Rae, and the downtown set: Lydia Lunch, who contributes the awesome ‘A Cruise to the Moon’, a track that mixes big band razzmatazz with fuzzed out, atonal guitar, and the Necessaries, a band with disco legend Arthur Russell on keyboard. Russell appears again, with Bob Blank’s wife Lola on the sublime ‘Jon’s dub’ of ‘Wax the Van’.

Then there are critical links between the no wave and jazz scenes, represented by James ‘Blood’ Ulmer and Sun Ra; lush adventures in dubbed out proto-house and avant-disco like Mikki’s ‘Itching for Love’, Bumblebee Unlimited’s weird but friendly ‘I Got a Big Bee’ and Debby Blackwell’s synthy ‘Once You Got me Going’. Blank Generation finishes with the perfumed disco of Aural Exciters, Blank’s own band which united punks like James Chance and Lizzy Mercier Decloux with disco singers like Taana Gardner and Christine Wiltshire.

Blank Generation leaves you hungry for more, while at the same time wishing things were still as simple now in an era calcified by gentrification.