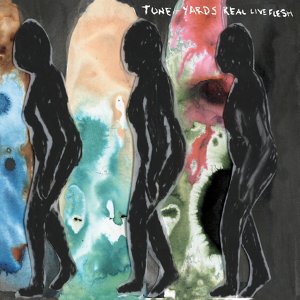 If the music you make is any indicator of character, then Merrill Garbus should be deemed at least certifiable. Her Tune-Yards project indicates an artist fresh out the woods with a penchant for ramshackle, grainy folk and underwater R’n’B.

As such, indie imprint 4AD is a fitting vessel to bear the fruits of this American’s oddball musical labours. The tipsy DIY pop she peddles fits the imprint’s glove of independence in suitably imperfect fashion, possessing an idiosyncratic ethos shared by artists such as Kristin Hercsh and Gang Gang Dance. There couldn’t be a better place for a character such as Garbus to take refuge from the outside world.

‘Real Live Flesh’ is the final song from her debut album Bird-Brains, and sounds as if it was constructed in a woodland far away from the trappings of a digitalised studio, conjuring up the spirits of Kate Bush and Bjork getting loaded on tranqs while rolling around in reverb.

While the video features plenty of Adam and the Ants face paint, and mugging and preening to the camera, the tune sounds like it’s going to collapse in on itself from being overly out of it; a skeleton loop abetted with scrap yard studio synthetics bending itself around Garbus’ woozy vocals. Although more of a sketch than a whole song, there’s a charming DIY flex going on balanced with enough sinister childhood vibes to keep you locked. Keep your eyes on her.