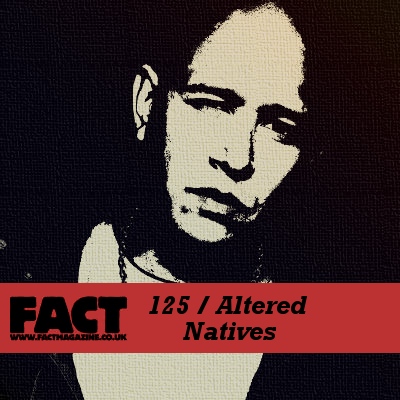 This Friday’s FACT mix is the work of Altered Natives.

Known best for last year’s ‘Rass Out’, one of FACT’s top 100 tracks of the year and a regular in the crates of Kode9, Jackmaster and more, Altered Natives – actually just one man, Danny Native – has been impressing us for a while with his deliriously drumscaped house tracks, often recorded with plenty of distortion and rough acoustics.

This March his profile is set to get bigger, having recorded an excellent remix of Ikonika’s ‘The Idiot’, set for release on Hyperdub next month. Time, we thought, to get Danny on the FACT mix, and the results are excellent.

As rough and tough as his own productions, Altered Natives’ FACT mix features six of his own jams alongside new material from DVA, Smooth Kriminal, MA1 and more. Watch out in particular for ‘In my House’ and the mental Dave Chapelle sampling ‘Fuck Your Couch’, which have been basically played on repeat since we got this mix in.

For a full interview with Altered Natives, turn to page two.

“My name’s Danny, I produce under the guise Altered Natives, but I’ve also become known to all as Danny Native.”

Where are you from? What’s your background?

“I’m from London, I grew up in Hackney now i live in North London. I’m half Trinidadian, half Italian but British born which is what bore the name Altered Natives.”

How would you describe your sound to those who don’t know you?

“My sound’s undeniably London based, my music is kind of pinned between genres. It embraces every bass orientated music out there, new and old. My music is very personal like a diary, it all has relevance to the ups and downs in my personal life.

“I battle my demons through my music with intent to channel whatever negative into a positive, in that environment I feel free, unstoppable. Life and the world in general is restricted by so many rules, I’ve spent my life breaking rules and paying. So really you could say my sound is the sound of rule breaking.”

“I do and can make your in the (genre) bracket music, but my passion is blurring the lines and I guess that’s what people have come to like about what I’m doing music wise. ‘Rass Out’ is a example of blurring lines. When I first played it, it was in a Broken Beat dance and it done its rounds there, then the House guys picked up on it, then the UK Funky lot anthemed it off. When you look at that track, it is all of those elements. Broken, House, UK Funky.”

Yeah, most people know you from ‘Rass Out’ – what’s the Altered Natives story to date? What were your early forays into music?

“Well predominantly I became more known in the Broken Beat scene which is where it started for me in ’99 under the name “Da Altered Natives”, then I dropped the generic “da” pretty much after my first release. I joined a minor crew I won’t mention for a few years where I did fuck all except stagnate in my own frustration at its poor business dealings.

“Plus to be a crew you need to be tight, I liked the idea but you can’t be a crew within a crew.
‘Til I left, which is where the name of my last album A Thousand days of Patience came from. Ever since I’ve been doing my thing, breaking rules. My earliest forays into music was tapelooping, making loops on double cassette recorders.”

How long have you been producing for?

“Over 15 years now, indirectly and directly in various genres. And 7 / 8 of that more hands engineering on with my own production.”

What stuff have you been up to lately – releases in the pipeline, etc?

“I’ve just finished a remix for Ikonika’s next release called ‘Idiot’ on Hyperdub due out in March on vinyl. From myself on my digital label EYE4EYE this year I’m releasing two album
projects from myself, one more on the brukk out broken flex and the other my house based album project.

“The first release is Ceramic’s ‘Bodyshock’ EP, which is a remix EP featuring remixes from myself, Jonny Miller, Stealth (from Stealth & Stylus), Funksta and Ceramic, due around first week in March. Also my follow up release featuring Sacha Williamson called ‘Believe in Me’ on Freshminutemusic who released ‘Rass Out’, due March/April. There are a few other “labels” I’m in talks with, but it’s all talk ‘til you come correct really.”

There’s some serious madness going on with the drums in your tracks – like ‘Tomorrow is the New Today’ is proper stuttered, then it has the live-sounding fills. ‘Where your Heart Is’ has that rattle to it. Is there a specific way you treat your percussion to make it sound that way?

“‘Tomorrow is the New Today’ is brukked out to fuck. That’s the essence of what i love doing in that particular style. Drum wise it’s all just in the moment of however I was feeling at the time.

“I’m a serious lover of finding drums to hack up, I personally like using drum samples as opposed to drum machines kits. I like dirt in my tracks.

“It’s great that people are still finding my back catalogue. On ‘Where your Heart Is’ it’s all traditional African percussion, plus the shitty mike probably gave it added ambience on the original recordings. I like that track, it has an odd comforting vibe to it, till it drops. I just love chopping up drums and reforming them like them nasty mechanically pressed chicken nuggets.”

You said on your myspace lately that you’re looking for a regular vocalist to expand the Altered Natives sound. You had any luck?

“No not really, I have had the honour of working with some fine vocalists so far. But in regards to finding a real vocalist to work with, I’m still looking. I do however really want to find a good MC too.”

“I’ve tried to represent a partial overview of a few handfuls of strong UK productions which I’m personally feeling and a few exclusives from myself for your mix.

“All of the producers in this mix are pulling off some neat tricks in their productions, and are just a few of the many names that i could fit in this mix in terms of names to watch new and old.  From seasoned pros Black & Spanish (Phil Asher [Restless Douls] & Orin Walters [Bugz], Zed Bias to new younger producers like Shane Blitz, Funk Butcher and Smooth Kriminal, the tracks I included from them stand out a lot for me. Tracks like DVA’s ‘Natty’ I love, the drum rolls give me this mental image of Godzilla sized wind-up toy bunny drummers crashing through London crushing Japanese tourists.

“All the bits from myself will be released over this year very soon. I hope you really enjoy the mix, it’s an unconventional connection of dots and line blurring.

“But ultimately this is all UK niceness.”

Tell us something we don’t know about Altered Natives.

“I have shares in Rizla. 16 years ago, I was once described as “the future of UK hip-hop” – he gave up A&R to be a landscape gardener. Er…and you can hear me every Thursday 8-10pm, vulive.co.uk.”