Toro y Moi: Causers of This 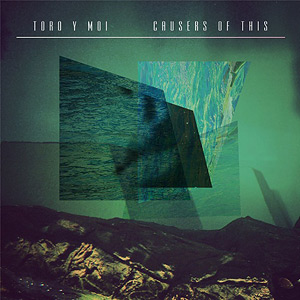 On his debut album, Causers of This, Bundick uses the latter sound as a kind of emulsifier, a glue to hold disparate genres together. He’s dipped his fingers into electro-funk, filter disco, deep house, and instrumental hip hop, and from a production standpoint at least, he’s created a near-perfect smear.

In theory, Bundick’s approach could be used to create either quick collages of beats or lazy, narcoleptic, instrumental expanses. But instead, he splits the difference, weaving half-formed songs into three-minute beatscapes. Sometimes just a verse and a chorus, sometimes in a falsetto, the vocal side of Causers of This shows Bundick’s got a long way to go as a songwriter and a singer. His unpolished delivery sometimes comes off as tender (‘Low Shoulders’), but it spoils the mood equally often. Rather than embracing his apparent lack of vocal gifts, Bundick tries a variety of tricks to obscure that fact. But whether he’s smudging it, multi-tracking it, singing his lyrics or halfway speaking them, he rarely sounds convinced or confident.

But Bundick also seems to have everything else pretty much figured out, and if he ever pairs up with a more assured vocalist the way Lindstrøm did with Christabelle (or just makes peace with his voice’s limitations), we’re all going to want to experience life through his filters.