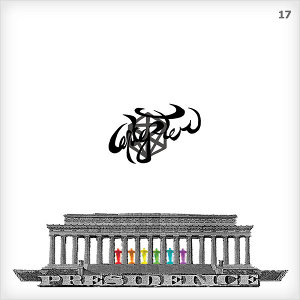 Brooklyn mainstays Excepter’s eighth album and second proper one for Paw Tracks shows them making what they call “long distance music”. What that means is that the rhythmic aspects of their last album, 2008’s Debt Debt are more or less dropped in favour of long improvised jams, all drone atmosphere spacey voices and pulsing synths; music in the same vein as the podcasts the band have been uploading on their website, perhaps as means of preparation.

The music on Presidence is dance music flattened out, leaving just the remnants behind, the trance and the chants. Lead singer John Fell Ryan mumbles through most of the tracks with occasional chanting from the two female vocalists, who give the music a sense of occult incantation as if the band are involved in esoteric ritual. At its best it’s reminiscent of Throbbing Gristle in Heathen Earth or Coil’s later work like Astral Disaster, but without any of those records’ grinding masochism and malevolence, instead favouring weightless dayglo trippiness and uncanny disorientating effects.

The influence of Cabaret Voltaire’s tape experiments hangs over tracks like ‘The Anti-Noah’, with a touch of the Kosmiche in Excepter’s heavy wobbly analogue synths and flute. It’s only the last track, ‘When You Call, where the drums come in to accompany vocals that sound as if the singers have been awake for days. If you’re willing to go the distance and you can cope with the seemingly world salad lyrics, then you’re likely to get pulled into Excepter’s otherworldy expansive sound world and enjoy it.