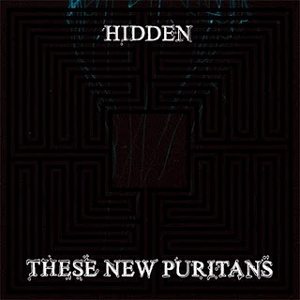 It’s pretty boring being alive now. Somewhere along the line we just ran out of ideas, a culture of revivalism and retro supplanting innovation until we’re left stagnating in our own derivative filth. That’s what we’re told by other generations anyway, except Jack Barnett, creating force at the heart of These New Puritans, hasn’t got the memo. If we’re all dossing about in Plato’s cave, listening to bad music and taking plant food, he’s the guy compelled towards the sunlight.

For proof, see ‘Time Xone’, the opener of the band’s second album Hidden. How better to distance yourself from the post-punk guitars of your debut LP, Beat Pyramid than to open with a maudlin brass overture? With barely enough time to adjust your EQ settings, ‘We Want War’ looms over the horizon like an army at dawn; a militaristic assault trampling boundaries and sabotaging ‘authentic’ instruments with choral builds that sound more like a modernist opera aria with dancehall’s scratchy synth horns and Fisher Price keys. And you thought the Horrors were being outre by embracing Krautrock…

It soon becomes apparent that TNPs own something which many claim but few possess – the inability to give a shit about what people think. It’s within this creative headspace that they refashion the tribalistic beats of M.I.A’s ‘Fire Fire’ into ‘Fire-Power’’s skeletal percussive scaffolding, showing insatiable appetite for sounds divorced from their context. On dissonant onslaught ‘Attack Music’, dubstep’s now-cliche wobble is made fresh again through its juxtaposition with oboe figures and the sound of shattering glass.

Some may trace Steve Reich through the xylophone tinkles and repetition of ‘5’, but the influence is via gamelan. It’s this knack for deconstruction – to take established forms but divest them of meaning – that makes Hidden feel entirely strange without recourse to avant garde naval gazing.

Sure, it’s easy is to churn out noise and say it’s progressive, like being a shitty painter and saying your daubs are high art. Hidden deflects such accusations with ‘White Chords’. On a micro level the stuttering swing and snap is bolstered by cable flexes and 8-bit punctuation, but pull away and the song gradually builds to a fluid piece of dramatic pop music, Barnett’s flair for abstract-profound lyrics coming to a head with lines like “X marks the spot but also means no”.

There’s no doubt Hidden could have so easily been a sprawling mess, but it’s unified by its drive towards something entirely original, and it succeeds. Like all breaks from the past it feels uncomfortable at first, but soon you’ll wonder when the rest of the world is going to catch up.