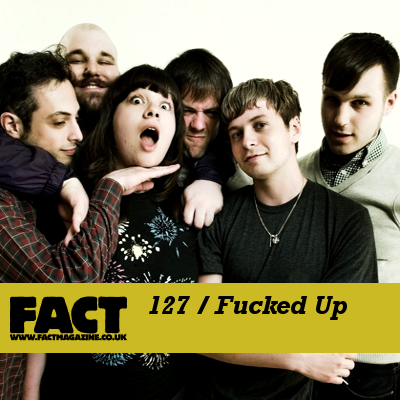 This Friday’s FACT mix takes the form of an investigation into the seven inch single, by Canadian punks Fucked Up.

Fucked Up, who themselves have released countless 7”s, many of which are now collector’s items, formed at the turn of the last decade. A series of band member changes and singles for labels like Deranged and Burning Sensation led to the release of the first album, Epics in Minutes (a 2004 collection of past singles) which forced those outside the Toronto hardcore scene to take notice.

Two albums later (2006’s Hidden World and 2008’s Chemistry of Common Life), Fucked Up are modern punk icons, as adored by their grassroots fans as they are The NME. They’ve been very naughty on MTV twice (in a bathroom, no less!), have had plenty of gigs stopped, at least one high profile court case, and vocalist Damian Abraham was last year invited to become a regular guest on Fox News.

In Jonah’s own words, “The seven inch single has a special status as a gathering place for songs. Saying something is ‘singular’ is probably a bit too literal, but there are certain focuses you can only apply on a 45 that will never work on a long player. So the single is the place to do that ‘something else’ before you really have to get down to it. Here are some ‘places’ the single occupies:

There you go. Full tracklist follows the download link.