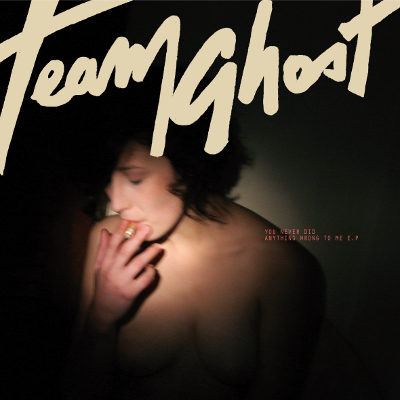 Nicolas Fromageau, who made up half of the original incarnation of M83, co-writing the band’s first two albums (M83 and Dead Cities, Red Seas and Lost Ghosts) before leaving the group, will return with a new EP under the name Team Ghost.

Team Ghost finda Fromageau backed by multi-instrumentalist Christophe Guerin and producer Jean-Phillip Talaga. The debut EP, You Never Did Anything Wrong to Me will be released on Sonic Cathedral on May 3, and comes available as a limited edition black and white vinyl 10 inch and digital download.

Musically, the press release boasts that it “takes the M83 blueprint of electronica, shoegaze and cinematic, Eno-esque soundscapes and adds krautrock rhythms, the sleazy Suicide-like post-punk of JJ Burnel’s ‘Euroman Cometh’ and the stark synth-pop of the French coldwave.” That’s number 67 on the coldwave count for press releases this year, for those counting. Kosmische was on 89 at this point in 2009.

You can download Team Ghost’s remix of fellow Sonic Cathedralists Yeti Lane below.

You Never Did Anything Wrong to Me Tracklist:
1. Lonely, Lonely, Lonely
2. A Glorious Time
3. Sur Nous Les Étincelles Du Soleil
4. Echoes
5. Only You Can Break My Heart
6. Colors In Time
7. Deaf (digital release only)