Joanna Newsom: Have One on Me 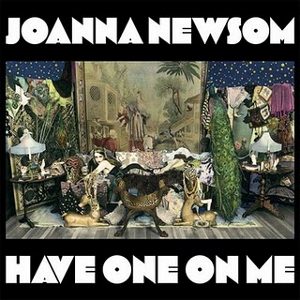 She’s come a long way, has “the demure Mme Newsom”. From the early association with freak-folk via her debut, The Milk Eyed Mender, to the expansive song-cycle of Ys to this – surely the album with which Drag City intend to turn their golden girl / elf into the Carole King of Generation Blog, or at least consolidate her standing as the pin-up for every bearded and bet-sit bound Bon Iver wannabe. Whatever the marketing strategy, Have One On Me has been pulling in the pundits and making a case for itself as an ‘important record’ on a par with the critical circle jerk afforded the last Animal Collective album. This time, though, the hype is almost justified.

For anyone turned off by Newsom’s trademark vocal inflections – akin to the love child of Kermit the Frog and Kate Bush – the good news is she has tempered this. There’s no more “I’m kooky, me” larynx gymnastics as Newsom sounds genuinely at ease in her delivery; a testament to the prodigious rate she has grown as an artist. Then there’s the music, which laudably prides itself on paying absolutely no concession to the ADHD Shuffle © masses. Have One On Me is three sides long, takes its own sweet time and you’d better get used to it. Pour yourself a glass of Californian red and ease down that road.

‘Easy’ sets the scene and establishes Have One On Me’s tone; plaintive strings seeping in and out of serpentine tempo changes whilst Newsom’s voice is whisper-in-ear intimate and pitch perfect. The early stages of the title track are both sumptuous and stripped down, Newsom’s harp fashioning heart breaking melodies before it veers sharply into piccolo and pots and pans staccato pop. ‘Good Intentions Paving Company’ could be a lost Judee Sill artifact, all shuffling piano melodies and multi-tracked harmonies.

Unlike Ys, which was somewhat smothered in Van Dyke Park’s baroque arrangements, Have One On Me breathes, heaves and sighs in a way befitting such a sizable sonic offering. There’s a welcome, deft, lightness of touch on spirituals such as ‘Baby Birch’ and closer ‘Does Not Suffice’. ‘In California’ exemplifies the album’s tasteful, minimalist palette as the song gradually uncurls to include muted trumpets, violins and banjo; Newsom managing to make the lyric “My heart is yellow as an ear of corn” sound genuinely affecting. Newsom’s words remain as West Coast winsome as ever but the lines, “…watching the waves dragging out of reach, tangling tails like a sodden sheet, dangling entrails from the gut of the sea” are far removed from the tweeness oft associated with her.

Have One On Me’s scope and ambition is as commendable as it is slightly exhausting – it demands you immerse yourself in its world. With spring tantalizingly close and the days beginning to creep out, here’s the perfect excuse to continue leading a monastic life.