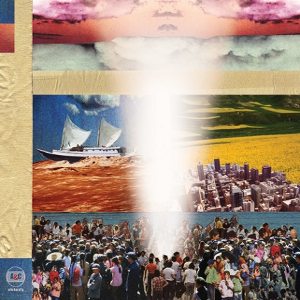 The continuing adventures of Broken Social Scene this year take them to the bottom of the sea, on the first song leaked from Forgiveness Rock Record, a new album from the celebrated Canadian collective.

‘World Sick’ begins murky and muffled, as if played underwater, then rises up to the surf with one of the smoothest riffs ever, and off towards shore we cruise. But the seascape is stormy, and everything here is ambiguous and poorly tied down. The music flails, hissy and sporadically stroppy. The lyrics tell us he’s world sick, but is this a play on ‘love sick’, and really it’s about yearning for the world? Or does he just hate us all, counterproductive pricks that we are?

There’s always so much going on in Broken Social Scene records that they do a pretty good job of representing every emotion simultaneously, with the loose fleet of instruments spinning off on their own little missions, letting you choose which one to follow. But for the most part ‘World Sick’ is a case of the melancholic orchestra settling down to headline the good ship Hype Machine’s stage yet again.