DFA Records will release a retrospective of music by Peter Gordon later this year. The album will be preceded this month by a 12″, ‘Another Heartbreak’, featuring three timeless pieces by the cult composer and saxophonist.

Gordon was born in New York City in 1951, and later studied with Robert Ashley and Terry Riley at the Mills College Center for Contemporary Music. As well as working solo and with his Love of Life Orchestra, he has collaborated with Laurie Anderson, Suzanne Vega, The Flying Lizards and Arthur Russell, among others.

‘Beginning of The Heartbreak’ was a big track in New York’s fabled post-punk downtown underground, first appearing on the 1979 Love of Life Orchestra EP Extended Niceties. It was produced by Gordon and Kurt Munkacsi, and featured Orchestra co-founders Gordon and David van Tieghem as well as David Byrne and Arto Lindsay. For the new edit, Gordon has reinterpreted the track’s wailing sax lead and added new synthesizer parts, without compromising the original’s intensity and eccentricity.

Over on Side B you’ll find ‘That Hat’, which was recorded in 1984 as part of Gordon’s award-winning score for the Bill T. Jones and Arnie Zane dance show Secret Pastures; it has never been previously released on vinyl. A songwriting collaboration between Gordon and Arthur Russell, it features Gordon on sax, Russell on voice and cello, and Rebecca Armstrong and New York Dolls‘ David Johansen on vocals.  Love of Life Orchestra regulars van Tieghem and Sublette also contribute.

We’ll give you details of the forthcoming album (which aims to “showcase work better known to dance music insiders than to the general public”) when we have them. In the meantime hold tight for the imminent arrival of this 12″, surely the most quintessentially New York art-disco piece of wax ever manufactured. 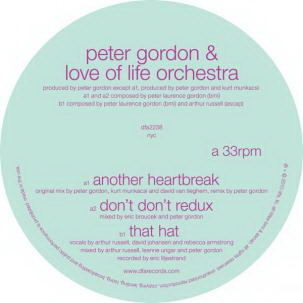 A1. Another Heartbreak
A2. Don’t Don’t Redux
B1. That Hat