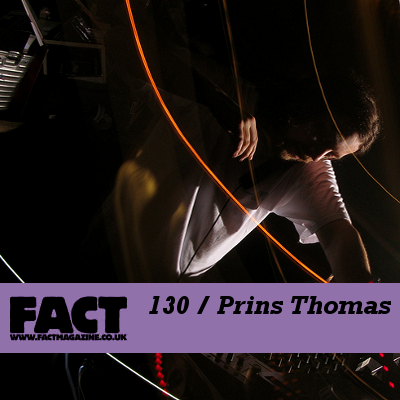 This Monday’s FACT session comes courtesy of Thomas Moen Hermansen, the man we all know – and love – for his work as Prins Thomas.

A Norwegian disco producer, Thomas works closely with Hans-Peter Lindstrom, and the pair have released three album length projects together now, including last year’s gorgeous Lindstrom and Prins Thomas II. He’s also one of Europe’s most acclaimed DJs and remixers, and the head of the Full Pupp label, who’ve released records by Todd Terje, Diskjokke and more.

Later this month, Prins will be releasing his debut solo album via the label. “I haven’t really thought about doing a proper solo album before”, says Thomas. “As just finding the time for my solo 12”s in-between [remixes] has been hard enough.

”The album came together quite quickly. The week after HP [Hans-Peter Lindstrom] and I finished mixing down II, I had a couple of ideas floating around and – having just had a good run in the studio – I was feeling really inspired.”

The self-titled Prins Thomas was recorded in its maker’s Oslo studio, “with HP next door and [Todd] Terje across the hall.” Lindstrøm plays keyboards on ‘Wendy Not Walter’ and clavinet on ‘Sauerkraut’, with Terje adding trumpet to the latter. Fans of Thomas’s tripped-out sound will know what to expect – a collision of disco, kosmische, krautrock, house and faintly Balearic pop, always with a firm emphasis on groove.

There will be a launch party for the album at London’s Corsica Studios on March 12. Room 1 hosts Espen Haa, Tensnake (live) and the Prins himself, while Dubby, Psychemagik and Hunee get busy in Room 2. Proceedings roll until 6am, so you know it’s a good one.

To get you in the mood, download Prins’s mix for FACT. A surf-soaked epic, it’s one of the most enjoyable we’ve had the pleasure of hosting to date.