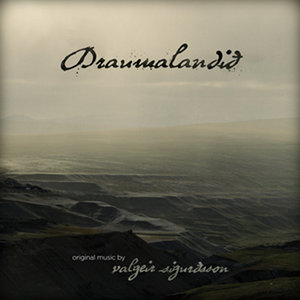 “Bucolic” or “pastoral” are adjectives often employed to describe music that alludes to nature’s warmth, splendor and enveloping beauty. With the exception of recent works by the likes of Richard Skelton, rarely is nature’s harshness, its uncompromising, mercurial temperament, evidenced on record. Icelandic producer Valgeir Sigurdsson, famed for his work with Bjork and ownership of the Bedroom Community label, goes some way to redress the balance with his soundtrack to the documentary Dreamland.

It would be crass to suggest that Sigurdsson’s latest album was merely an attempt at bucking the trend in nature inspired Musak. Dreamland is a soundtrack to a sobering and important film that chronicles the plight of his native country’s suffering at the hands of a rapacious muti-national and its profound repercussions upon the country’s communities and natural resources. Faced with a grim economic future, Iceland has bought wholesale in the prospect of massively expanding its aluminum smelting industry, the impact of which on the country’s environment is explored in the film.

Sigurdsson’s Dreamland soundtrack opens with a reimagining of Icelandic folksong, Grylukvaedi. Lyrically, it concerns a greedy force that comes to consume naughty children. Its parallels with the film’s contents are apparent but on a musical level it works brilliantly – here is a traditional piece of Icelandic music that is literally dismantled as organic instrumentation such as guitars, strings and the human voice are digitally refracted with beautiful belligerence. The rest of Dreamland plays out in more cinematic but no less affecting style with Sigurdsson’s sublime attention to detail anchoring the movement in music. The title track is an ominous, string and piano lead piece which ebbs and flows between minor key melancholy and a melody tantalizingly close to being optimistic. ‘Beyond the Moss’ is a disconcerting, foreboding exercise in found sound and cello riffs whilst the layered strings of ‘Cold Ground, Hot’ seep in and out of your cranium like disappearing breath condensation on a bracing morning. Indeed, given that this is a soundtrack album, the songs are fragmentary and leave you wanting more. The arresting swoop of ‘Laxness’, which evokes Iceland’s twinkling vistas, is sumptuous even in its brevity.

Dreamland ends with the wryly titled ‘Helter Smelter’, a track which sees the melodic theme of the title track reprised and couched amidst a swirly vortex of ascending strings. It’s a fitting conclusion to the aural realization of a film that asks the rhetorical question – how much does a mountain cost?