Get Shamanistic: inside Kingdom’s royale sound 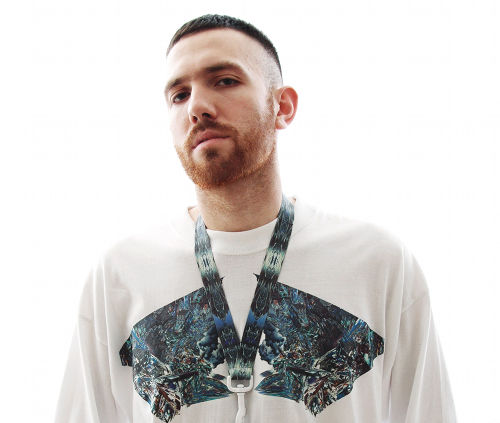 Born and raised in Massachusetts, Ezra Rubin – aka Kingdom – came of age on the New York club scene.

Having relocated to the Big Apple at 18 to study art at Parsons Scool of Design, it wasn’t long before he was DJing, throwing parties – including Club Vortex and ddarkk – and producing his own singularly, irresistibly banging tracks.

His signature anthem “Mind Reader” has been slaying dancefloors for nigh on 18 months now, and finally received an official release in February courtesy of Fool’s Gold Records. It’s one of those club tracks that feel instantly, electrifyingly special from the moment you hear it; despite the length of time it’s been knocking around, don’t be surprised if it goes much further. Maximalist but uncluttered, the cavernous echo reverberating around the track as important as its twisting, writhing worm of a bassline – and its astonishingly powerful diva vocal courtesy of Shyvonne, at once imperious and pleading. A long-time ally of London’s Night Slugs crew and remixer for Kid Sister, Nguzunguzu, Telepathe and L-Vis 1990, the Kingdom sound is an entirely distinctive but entirely necessary addition to the global bass sound.

“I’ve been learning everything with this first release…”

Tell me about your background.

“I grew up in Massachusetts, outside Boston and moved to NYC at 18 to study art at Parsons to study art. I started making my first tracks in 2003, and DJing about three years ago.”

‘Mind Reader’ is one of the biggest club tracks I’ve heard in an age, and such a perfect synthesis of aesthetics: the big-room techno vibe, the emotional R&B song, the cut-up garage vocals. Its drop is one of the most exciting I’ve ever heard, and it seriously goes off on the dancefloor. Tell me more about how it came to be, and your intentions when you were making it.

“It progressed over such a long period of time that it wasn’t really a case of intent => direct result; it grew slowly. When I started making it, that was when 4×4 and bassline was just coming out, when Dexplicit and T2 were getting big, so I was interested in those fast 4×4 drums and that big bassline; but then I started experimenting with triplet new jack swing snare drums, and I wanted drama in it too – moments where the beat would drop out and it’d get really spacey. Basically I wanted to make an R&B song that would also be a really hard club track – though when I made the instrumental I didn’t have the immediate intention of putting a vocal on it; that came about when I met Shyvonne, wondered what I should do with this amazing vocalist, and had this track ready for her.”

The Todd Edwards remix is also excellent, and quite a coup – how did that come about?

“Haha! I’ve been learning everything with this first release. I didn’t know how it all worked, and the label asked me who I wanted to remix it. I was like, oh, I just get to pick fantasy people? I honestly didn’t think it would happen: I just picked a name who I think is amazing, someone who is a legend to me.”

You once tweeted that your goal is to “make club tracks that danceably and abstractly express the nostalgic teen longing of a Mariah Carey song”. As manifestos go, that’s pretty unbeatable.

“It’s interesting that her latest album, Memoirs Of An Imperfect Angel – produced entirely by The-Dream and Tricky Stewart – is one of her poorest-selling, because I think it’s possibly her best ever. The songs take repeat listens to sink in, but when they do sink in…I can be in a fine mood, or thinking about something entirely unrelated, regardless of whatever my emotional state is naturally that day – if I listen to those songs, I’m taken to the precise place the producers and writers intended me to be taken. And when I listen to some of those songs, there’s a really irresistible teenage vibe – she talks about skipping school, the way when you first fall in love with someone there’s that illogical longing – like, missing them even when you know you’re not supposed to be with that person. And there’s beautiful, subtle production that’s very full, and on repeat listen you find all these little details but it’s all very understated – and yeah, I want to make club music that can give that same sense.”

Electronic dance music can be quite a nerdy boys’ world sometimes, really focused on beats and equipment. It’s refreshing to find a producer so willing to talk about the crucial emotional dynamic of the music.

“I totally agree – I guess that’s just who I am, that’s my personality, but I do think the music needs emotional depth to be interesting. Some people might think my music comes off as overly dramatic – maybe it doesn’t have the cold restraint a lot of people want out of dance music – but there’s so much power in the balance between the two. Like in “Mind Reader” – it does have a cold, dark side, but it has warm side too; a girl side and a boy side. I want to try to bring all of that into the music.”

Are you guided by a similar aesthetic when you DJ? How do you go about constructing a set?

What’s the deal with the NYC club nights you’ve run in the past? Tell me more about your aim in starting them, and whether you have any plans to bring them back.

“Vortex was my first real night that I started in 2008 – I wanted to create a night that was really clubby, with flashing lights and bass and a dark space, with visuals and animations by myself and this artist Black Moth. I’m planning on relaunching it at some point with Dre Skull, though maybe with a different name. ddarkk, on the other hand, was a night I could feel a lot more casual about, where I could play a lot more R&B and old-school grime and garage. Both have been victim of NYC venue issues, to an extent.”

What’s the state of club culture in NYC at the moment? It doesn’t sound like it’s easy.

“There’s no progressive DJ culture, really, so it’s a bit harder to put on an innovative night with DJs no one’s necessarily heard of. People would rather go to their corner bar and listen to someone play off their iPod – that doesn’t bother them. At the other end of the spectrum, the really big clubs will be taken up by big name mainstream house DJs. So there’s a big gap – what’s needed is something that’s new and interesting, but still a real club. That middle space needs to be filled, and I either hope to fill it – or move to LA, because there’s also stuff going on there that I’m really interested in, artists like Nguzunguzu and Total Freedom.”

On the flipside, what have been the positives to honing your craft in NYC?

“New Yorkers are the best dancers of any city I’ve been in. Well, I think people in America know how to dance better in general, but I’ve DJed to some of the most amazing dancers in NYC – and as a DJ, that’s pretty inspiring. It’s so satisfying to see someone go OFF and really be dancing full on. New Yorkers are more stylish than most too – not in the sense of designer labels or whatever, but in the sense that they’ve really thought about how to put their look together.”

So the crowd is being creative as well as the DJ…

You seem to be part of a very particular global community of producers with something indefinable in common: you’ve talked about your affinity with, eg, Nguzunguzu, you released “Mind Reader” on A-Trak’s Fool’s Gold label, you’ll be releasing material on Bok Bok and L-Vis 1990’s London-based Night Slugs label. Are these connections something you’ve thought about?

“Bok Bok and I were talking about this just now – we haven’t put our fingers on it yet, but there’s this sound aesthetic that’s unspoken but seems to be shared by a group of people; and it’s not closed off enough that you can make a good name for it. Some of us did a Ustream two nights ago – it was Ikonika, Jam City, Girl Unit, Bok Bok, Manara and myself – and though we were all playing different records from different genres, there was still something indescribable about the sound we were doing. I guess it’s open-minded global club bass music with a hint of oddness, and a sense of restraint while still being pretty wild? Oh God, that’s like the worst description ever.”

What I find interesting in terms of how fresh it sounds is that it’s so casually global – a lot of it is fuelled by how easy it is to exchange ideas and information with like-minded artists thousands of miles away on different continents.

“Yeah, part of it is definitely the internet. I mean, Bok Bok and I met through the internet, and now we’re constantly influencing each other, working together, collaborating on things, hearing each other’s mixes – these things wouldn’t have happened without the internet. And that’s what makes it so hard to pin down – I’m always influenced by friends in LA, who are influenced by stuff they heard in Mexico, and it’s a crazy cycle. There’s something great about and something a little wrong about it too; it is less localised, and some of my favourite music is extremely localised, like Chicago juke – but is there really such a thing as local music now? When it travels, it can do amazing things. Like, there’s a Belgian juke guy called Kill Frenzy who’s added this whole intense Euro element to juke that takes it to a whole different level.”

Moving away from music, what else in life inspires you?

“Science fiction and fantasy movies – my new tracks have even more of a mystical, spacious vibe. I guess “Mind Reader” and “You” have this intense, emotional side, whereas the new stuff almost sounds more spiritual, shamanistic club music. I’m also into the outdoors – it’s not very direct, but somehow the times that I’m able to be in nature and out of civilisation are extremely inspiring to me. Not as literal as using forest sounds or anything, but those experiences out in nature really inform me when I’m in the closed space of production – I want to recreate those open spaces in club music.”

Shamanistic club music sounds extraordinarily tantalising. What are your plans for the rest of 2010?

“Just continue DJing and producing, really, as boring as that sounds. There might possibly be a video for “Mind Reader”, so that single’s lifespan isn’t done yet; I’m also looking forward to getting the chance to showcase some new sounds on my next EP for Night Slugs.”