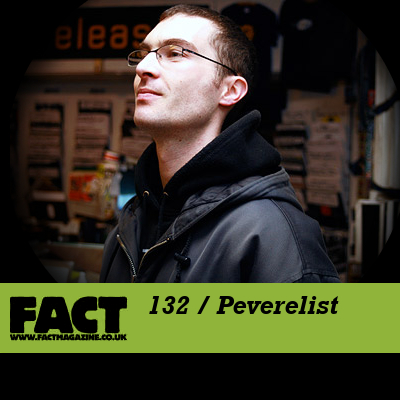 What to say about Peverelist that hasn’t already been said?

The unflappable Bristol-based Tom Ford isn’t just one of the most innovative and singular-sounding producers to emerge from the UK underground in recent years, he’s also one of the busiest – not only finding time to turn out consistently future-rushing tracks but also running a label (Punch Drunk), managing a record store (Rooted Records) and DJing around the world. We wouldn’t be surprised if we learned that he was a Michelin-starred chef as well, such is the apparent ease with which he handles a schedule that would d kill a less dedicated man,

Announcing his arrival at the more experimental and confidently minimalist end of the dubstep spectrum in 2006 with the ‘Erstwhile Rhythm’/’The Grind’ 12″, Ford has gone on to develop a truly distinctive  style, resulting in modern classics like ‘Roll With The Punches’ (2007), ‘Clunk Click Every Trip’ and, FACT’s personal favourite, the poised, devastating ‘Infinity Is Now’. Jarvik Mindstate, his debut album, released late last year, confirmed his status as a producer with a versatile but coherent, precise vision. He’s a long-time avowed junglist, and that fact is increasingly apparent in the cyclical roll of his tracks; where so much dubstep is content merely to judder and stab, Peverelist’s dubs always have a real forward momentum, something their maker partly credits to the fine example of 90s Full Cycle dnb releases like Krust’s Genetic Manipulation and Die’s ‘Reincarnations’.  And always there’s a grit to his sound, a proper, DNA-level understanding of soundsystem dynamics and imperatives, that distinguishes Pev from all the many aspirants and imitators.

As a remixer, too, Ford is no slouch: last year alone saw turn him out complex, sensitive overhauls of STP’s (Shed’s) ‘The Fall’, 2nd II None’s ‘Waterfallz’ and Hyetal’s ‘Pixel Rainbow Sequence’. His Punch Drunk label meanwhile continues to go from strength to strength. As well as providing a home for Peverelist productions, the admirably local-minded imprint has launched the careers of some of Bristol’s brightest sons, including Gemmy and Guido (who’s expected to drop an LP on the label later this year). Punch Drunk has also helped position Rob Smith in his rightful role as a godfather of dubstep, releasing top-drawer new RSD productions like ‘Corner Dub’, ‘Jah Way’ and ‘Good Energy’, and remastering and reissuing classic (and more resonant than ever) Smith productions from years gone by on new sister label Unearthed. Peverelist’s FACT mix in fact closes with Smith & Mighty’s evergreen ‘Bass Is Maternal’, available on UNEARTHED002.

Ah yes, Peverelist’s FACT mix. It was “recorded live with two turntables and a bag o’ acetate” just last week, and is “choc full of exclusives”. Our selector has politely declined to give us a tracklist, which only adds to the thrill of hearing so much new and energetic material. Apart from the aforementioned ‘Bass Is Maternal’ and the ubiquitous ‘Footcrab’ (by Addison Groove), we recognise nothing, though we reckon there are at least two previously unreleased Peverelist tracks included (those drum sounds couldn’t be from anyone else). The rest is all speculation at this stage. What is certain is that this is one of the most fluid, exciting and oven-fresh mixes we’ve ever had the pleasure of hosting.  So, if you want to know what the future sounds like, listen up good.