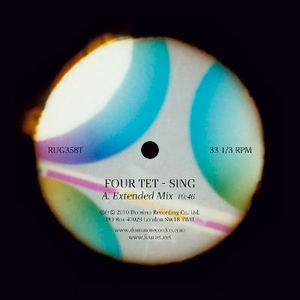 Kieran ‘Four Tet’ Hebden’s latest long player There is Love In You is being touted from here to the horizon as the best thing he’s cracked off aurally for time. And in this case the bluster is worth opening your ears to. A little more house and a little less Homebase, it’s the musical equivalent of airing a long term partner down at the discotheque and rediscovering why you got with them in the first place.

‘Sing’ is the latest track from the album to be given the single duty, and features slo-mo house man Sam Shepherd, aka Floating Points, on rerubbing duties. Previous releases on R2, Eglo and Planet Mu including underground bomb ‘Love Like Me Like This’ have gained him fans as far-reaching as Detroit mainstay Scott Grooves, and here Points rewires ‘Sing’ into a 14 minute echo chamber, slowly squeezing as much musical juice as possible from the original in an epic rework that bangs and broods in all the right places. Following recent remix commissions from Joy Orbison and Roska [not to mention pre-empting future ones for Mosca and Hard House Banton, revealed yesterday – Ed], it’s also an indication of where Four Tet’s head is at right now, musically.

Indeed, with every release Hebden’s boffin status continues to grow. But this chugging, ravey work out indicates that although his own music is sometimes too nice for its own good, it’s also begun to take its head out of the books and start to dance…