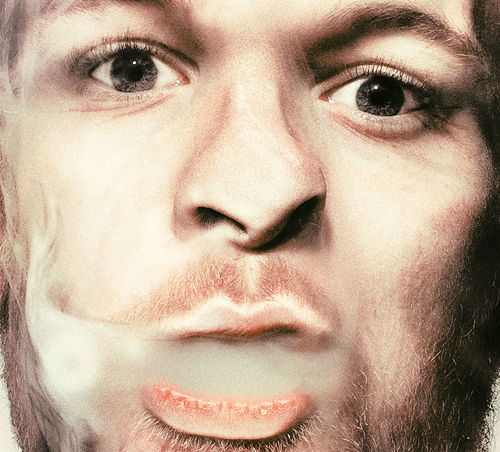 Rusko‘s debut album will be released via Mad Decent this May.

Rusko came to fame in 2006 and 2007 with a series of dubstep tracks including ‘SNES Dub’, ‘Jahova’ and the infamous ‘Cockney Thug’, inspiring a new wave of dubstep producers who focused on the metallic, ‘wobble’ end of the sound rather than the sub-bass of Digital Mystikz, Loefah et al.

As a result, Rusko’s become a figurehead for that new movement of tear-out dubstep – a love him or hate him figure of the scene – but in truth he’s made a lot of good music, and recent tracks like his ‘Bionic Commando’ remix have a clarity missing from so many of the chainsaw mid-range focused chancers that followed him.

Of course, he’s also done some right dodgy music – who remembers ‘Bread Get Bun’? So this really could go either way.

O.M.G.! features appearances from Crookers, Gucci Mane, Ben Westbeech and more, and also sports the charming cover art above. Nostril hair all over the shop.

It’s due for release on May 10, and will be preceded by a single release of ‘Woo Boost’, with remixes by Borgore, Subskrpt and Douster. You can watch the video for the original below, which looks a bit like it was cut from Nathan Barley for being too stupid. Tracklist for the album follows.