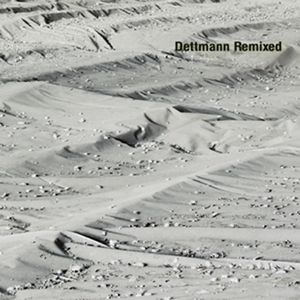 Marcel Dettman releases this remix EP ahead of his madly-anticipated debut artist LP – something that’s normally a smart move, the perfect way to build hype without giving away any of the album’s actual content. The only thing is, these aren’t even remixes of tracks from the album, rather unreleased tracks from who knows when. They sound pretty much like what you’d expect: dark, subterranean mood pieces; dystopian future music, heavily industrialized to an almost soulless state, dismantled by Dettmann’s cohorts and put back together in a ruthlessly efficient and utilitarian manner.

Norman Nodge tackles the first two tracks, and while Dettmann’s fellow German and Berghain resident is nothing if not consistent, these remixes are arguably even less friendly than his usual fare. His remix of ‘Shift’ is ironically stationary, sounding like the prototypical Ostgut track: a blueprint shorn of personality or nuance, thickets of sound packed tightly into dense blocks created on an assembly line. It’s not a bad track by any means – it’s a satisfying thumper satisfied with merely thumping. His mix of ‘Unrest’ fares a little better, drunken percussion rotating woozily around a forceful kick; the track traverses varying stages of intensity but the constant instability quickly becomes disorienting, even obnoxious, begging to be mixed in and out of something.

The heretofore unknown Wincent Kunth (seriously, I’ve never seen this guy’s name before) proves more interesting, his swathes replacing Nodge’s acutely defined edges. His rework of ‘Vertigo’ is almost Funky, near-syncopated drums and dynamic bassline tempered by monochromatic strings. ‘Wound Up’ is even better, probably the track most faithful to Dettmann, but it’s lush, flattening Dettmann’s sharp accents into softer tones. It breezes along at a comparatively slower pace, and despite its appealing qualities it’s probably the most static of all four tracks, showing little concern beyond grooving complacently in place.  It’s not until the end of the track that Kunth begins to let things go and the synths start to undulate.  Of course, by then, it’s over.

Therein lies the caveat of this release; these remixes are sometimes too restrained, and end just as they start to show promising signs of development. There’s nothing wrong with this EP, and indeed, at Ostgut, quality control is still cutthroat as ever. This is the kind of stuff that other labels would kill for. No doubt these tracks were made solely for DJing, and presented here as standalone tracks they fail to transcend their obvious purpose. If you’re looking for something a bit more dynamic and cerebral, you might do well to just wait for the Dettmann LP. If you want punishing functional techno, I can’t recommend this release more, its twenty minutes of unrelenting precision bound to satisfy the staunchest of tech heads – and of course, DJs looking to beef up their sets.