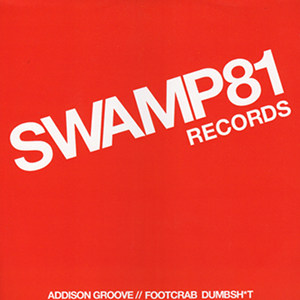 Headhunter’s a funny case. Since the dubstep artist’s debut in 2006, he’s released regularly on the same Tempa label as Skream, Benga et al, and is one of few artists to release an album for Tempa, 2008’s Nomad. He’s released some excellent singles, and for me ‘Mint 500’ is one of the best dubstep tracks of recent times never to see a proper release. Yet it’s only now, making juke house around 136 bpm (the Chicago-born dance genre, an evolution of ghetto house, is regularly made at 150-160) under a new guise, Addison Groove, that he’s found his first hit.

If you’ve been to a dubstep night this year, or indeed, a night with any vague connection to dubstep, then you’ve probably heard ‘Footcrab’. It’s the one that goes “footcrab footcrab footcrab footcrab”, though there’s always the chance you misheard it as “woodcraft”. And it’s absolutely brilliant. It really is that simple – a steady kick, with ice-cool chords and a cut-up vocal on a constant loop, that eventually breaks down into a long, almost mournful slower female vocal that could be a completely different song, before footcrabbing its way to the finishing line.

What more can you say? It’s not surprising that a recognised producer who’s shown a tendency to favour textures and concept (Nomad was named such as each of its ten tracks were made in a different place) over hooks creates an anthem when he makes a really simple piece of music with, well, a killer hook; though it’s less common for it to happen under a different name, in a new style. Let’s just enjoy it while you’re not sick of it. Footcrab footcrab footcrab footcrab.