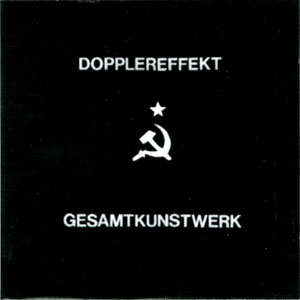 Amid the late 90s’ fascination with electro, Dopplereffekt’s first widely available record barely ever counted as a cult artefact. Gesamtkunstwerk may have been compiled from virtually unobtainable dispatches trickling out of Detroit, but received wisdom on its contents was well in place by International Deejay Gigolos’ original 1999 release. With the backing of DJ Hell’s label, word  then spread to the developing electroclash scene, whose prototypical acts already acknowledged an influence.

Adopted staples such as ‘Plastiphilia’ pervert Kraftwerk’s automaton shtick, in a way humanising it – “I want to make love to a manikin,” we’re informed in the mannerism of ‘The Robots’, “I want to suck it, I want to fuck it.” Combine this with the female vocals of ‘Pornoviewer’ and ‘Scientist’, and the model is evident for the blank-eyed but provocative delivery cultivated by Miss Kittin and ADULT.’s Nicola Kuperus.

As trends have swelled and deflated, Gesamtkunstwerk’s intriguing qualities have remained perennial, bringing us to Clone Records’ 2010 edition, in fact a new pressing of a reissue by the label some three years ago. A place next to Drexciya’s reliably mythologised canon is unlikely to have hindered popularity, with Dopplereffekt’s key member Gerald Donald well known as a collaborator in the former. But without diving into fleshed-out Drexciyan narratives, the album has its own means of contaminating the imagination, a compound of sexual, racial and technological allusions that rusts away at the music’s precise manufacture.

It’s perhaps surprising that the sexual imagery appears to be more notorious than that of ‘Superior Race’, which comes from an EP entitled Fascist State, or ‘Sterilization’, with its body-mutilating sonic and the lyric “we had to sterilise the population.” Consider that Donald periodically assumes the identity Heinrich Mueller (which he claims doesn’t reference the Nazi Gestapo head of the same name) and the sense of an ambiguous outlook, rather than a wholeheartedly dystopian one, could be thought at least a little edgy.

Curious in this context is how often Dopplereffekt’s programming short-circuits to the Kraftwerk of Computer World, sonically deleting a good deal of the imprint of black music – as conventionally understood – made on electro from Cybotron and Model 500 onwards. Some like to debate techno and electro’s derivations from the Europhile interests of Detroit’s first wave, playing up instead the debt to synth-funk and even, supposedly, electric jazz fusion. It isn’t clear that Donald aims to satirise or confound such hand-wringing, but his chosen aesthetic obviously does contain a wry dimension.

These days Donald’s music is best known for its intense focus on science. While examples such as Linear Accelerator and Calabi-Yau Space are fantastically recondite – described before as fictions that render the otherwise imperceptible space of modern physics – 2002’s Wireless Internet, under the Arpanet alias, might explicitly pose his crucial question. “Who will benefit and who will suffer?” a speech program asks on opener ‘The Analyst’, “these are the important questions we as a society must answer.” The album thus sets out, presciently, to explore the phenomenon of wireless technology and mobile information access. The thread tails back through another project, Japanese Telecom, to ‘Cellular Phone’ and ‘Voice Activate’d on Gesamtkunstwerk. The latter are absorbed into the darker hue indicated in an epigram, inscribed on the first edition sleeve but missing from the Clone version: “Biological socialism leads towards victory.” If it seems Dopplereffekt has always played with similar lines of reasoning, then at first the setting was more perturbing: totalitarianism and its accompanying technical ideologies of eugenics and total war. (It has also been suggested that ‘Rocket Scientist’ specifically evokes wartime German research into weapons propulsion.)

While trying to unravel Gerald Donald’s themes can be exhausting, his catalogue of activities is equally dense and uncertain: aside from documented appearances, of late he may be at the hub of an expanding consortium of outfits with names like Zerkalo, Black Replica and Noether Symmetry – or there may be no more than rumours and hoaxes at work. Such proliferation hasn’t obscured or devalued Gesamtkunstwerk, though. Despite figuring in a genealogy of music that trades on notions of inhumanity, it’s the uneasily human, sometimes witty counterpoint that makes this more than an extremely well produced electro record, continuing to bring listeners back.