May 2010 will see the release of EXP, a new audio-visual work from Frank Bretschneider based on the idea that “fine art should attain the abstract purity of music”

Bretschneider is one of the co-founders of Raster-Noton, and it is via that label – home to recent releases by  Atom TM, SND and Alva-Noto – that EXP will be brought to the world. According to a press release, the work is:

” [An] attempt to assimilate the qualities found in music – including movement, rhythm, tempo, mood, intensity and compositional structure – within visual phenomena. The music for the project was composed of specific generated and selected waveforms, feedbacks, impulses, clicks, the sound of mechanics, electricity, magnetism, light and other radiation. In addition and since the animation is mainly driven by sound frequency and intensity, the sonic quality of these sounds makes it possible to obtain an optimal effect on the graphics motion. In combination with several other ways of controlling the animation – from MIDI programming to applying motion curves – the visualization represents an exact reproduction of the audible occurrences. As a consequence the computed images often attain an unexpected beauty, from simple geometrical patterns to extraordinarily complex forms.”

EXP includes both an audio CD featuring 35 tracks, and a data CD featuring the live visuals of tracks 01 to 20 as a quicktime movie file (.mov). You can preview the visuals here. 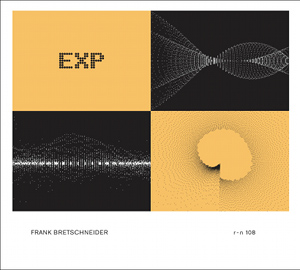