The Knife: Tomorrow, in a Year 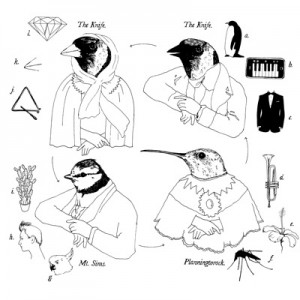 This is not a new album by The Knife; the follow-up to the flawless Silent Shout, when which it comes, will be a much bigger deal. This is an opera about Darwin which The Knife composed and which is performed with the help of Berlin-based Boltonian alt-songstress Planningtorock, Mt. Sims, and the mezzo soprano Kristina Wahlin. It was performed in Copenhagen last year and no one was that bothered.

Darwin is fascinating to modern audiences because he seemed so ahead of his time, as if we’ve only just caught up with the full scope and pace of his idea. And this album expresses this by being all about the intersection of the ancient and the modern. The idea of natural selection was new and vivid, yet more rooted in the past than religious ideas – the scale of geological history expanded from 6, 000 years to millions of years. Modern science revealed the world around us to be more ancient than we could imagine, and the recent dispute between Darwinists and creationists is another ancient-modern conflict, fresh new science disputing sage old tradition.

So the Knife choose opera to express Darwin’s ideas, but opera which is filled with modern music, shoved in with brute force. The music here is harsh and digital, but Kristina Wahlin’s voice is standard operatic fare, an echo of the past resonating through the ages, constantly reminding us of how what is now contemporary once began.

Darwin’s idea has penetrated every aspect of the social sciences as it becomes accepted (perhaps wrongly) as a universal truth. Richard Dawkins once wondered what would have happened if in the olden days, scientific foundations bankrolled artists and composers instead of the Church. Would we have great operas, shrines and paintings about scientific, rather than religious concepts? The closest we ever got was Holst’s ‘The Planets’, and that sounded like everything else anyway.

But then, this also sounds like nothing else. The opera was composed using scientific methods of interpreting Darwin as its starting point. The songs are constructed like gene trees, beginning simply, before slowly branching out into breathing, multicellular pieces of work. And, like the expanse of life itself, it takes an incredibly long time to get going.

Tomorrow begins sounding horrible and chaotic, in line with the brutality of nature which Darwin revealed. It goes through an hour and a half of ugly strife, slowly rising out of the dull primordial, synthy soup with flickered glitches, summoned by Wahlin’s angelic voice. The lyrics have two main themes: fossils, and how they are timeless once formed, belonging simply to “the past”, and the death of Darwin’s daughter, a painful reminder of the chaos and brutality of nature for the man who first fully comprehended how this very brutality is responsible for all the beauty in the world. These two themes are intertwined, and so we get the narrator remarking on the seismic shifting of rock in the same voice as is used to talk about the death, the meanings of the lyrics becoming confused and bivalent; each expressing the other within its own terms.

Things begin to get faster on the second disc. The lyrics switch from geological to ornithological themes as the music becomes more varied. The music begins to gather a pulse with ‘Colouring of Pigeons’; a tribal pounding supporting the listing of new types of animals. We get the first song with a regular, comprehensible beat, ‘Seeds’, two songs before the end of the album. Then Tomorrow closes with its title track, a beautiful, happy song about social niceties and human relationships, the final stage in evolution, bringing us up to the modern day. It finishes indistinct and uncertain, showing that the process is far from over. But it feels like a proper pop song, the first on the album to not require any hard attention in order to be fully appreciated. It has been a long, hard slog, and many will not bother to get to this point, but they belong in the soup where they began.

Darwin himself rejected the idea of evolution as being a hierarchical system, with species ‘advancing’ as time wore on, instead emphasising that they were simply better adapted to changes in environment. And the same is true with these songs. While the second disc appears more advanced, more intricate and complex, more comprehensible, it’s simply that its songs are better adapted to what we want from the Knife. The early songs here are just sketches, the ancestral foundations of more beautiful music. This is a profound album which requires this kind of thought process to appreciate but, really, ambition and profundity of this scale is exactly what we should expect and receive from our pop stars.