Egyptrixx: ‘The Only Way Up’ 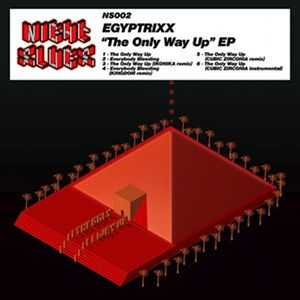 Bok Bok and L-Vis 1990’s label Night Slugs earned itself all kinds of attention for its debut release; the genre twisting ‘Nike’/’Square One ‘by Mosca. With the label’s second release ‘The Only Way Up’ coming from Canadian dancefloor filler Egyptrixx, Night Slugs seems to be going from strength to strength.

The title track – in true Night Slugs fashion – refuses to adhere to the kick-snare template of dubstep, instead leaving you with a pencil sketch of clicking percussion and sheets of thick bass. The track moves with incredible atmosphere, bolstered by the delay and reverb shimmering across the loose pads and stray chords that intersperse Egyptrixx’s elasticised synthesizer.

Never a label to stay trapped in one sound, the following track, ‘Everybody Bleeding’, begins with far more aggression; a tight blend of stomping, skipping bass drums from the offset. Using an intense, screeching synthesizer to form a titanic build, the template could almost be the slightly Neanderthal ‘build-drop-build-drop-build-drop’ format. Egyptrixx however, offers a more cerebral adoption of this format. ‘Everybody Bleeding’s drop is fairly unique, offering huge swathes of bass between stop-start scatterings of syncopated rhythm. Jerky and pock-marked with kicks, the track sees a return to what seems to be Egyptrixx’s sonic trademark; beautifully stretched synthesizers.

Remixes come from Ikonika, Kingdom and Cubic Zirconia. Ikonika abandons her 8-bit musings for a more celestial sound, taking the lazy atmosphere of ‘The Only Way Up’ and hitting it with clacking soca rhythms and ethereal pads. The loose, stretching Egyptrixx synths are still there, but the inclusion of Ikonika’s airy digital sound is a smooth merging of sonic identities, turning the track into a perfect hybrid of two important music labels in Night Slugs and Ikonika’s home Hyperdub.

Kingdom uses vocalist Shyvonne to turn ‘Everybody Bleeding’ into a far more accessible number; with its taut rhythm and its refrain of “I don’t need you”, there’s no reason that it couldn’t become a ubiquitous piece of house music even outside of the realms of Night Slugs, Hessle Audio, Hyperdub et al. Cubic Zirconia injects a whole host of rolling percussion into their own vocal take on ‘The Only Way Up’. Still keeping the flexible skeleton Egyptrixx laid out, the remix offers a fairly uninspiring take on what is in fact an incredibly easy track to become attached to. Spoken cod-soul vocals intrude on Egyptrixx’s synthesized tones and the new, too-thick rhythm.

Whilst the instrumental version is far more palatable, it’s still nowhere near the quality of the original. This, in itself, speaks volumes. As with their first release, Night Slugs offer up another selection of tracks which within seconds of completion seem to lodge themselves entirely in your head.