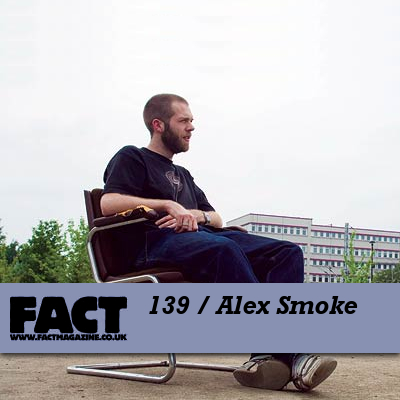 Most producers take a few years to mature, but ever since he first set eardrums thrumming with his debut ‘Random As’ 12″ in 2002, Alex Smoke – real name Alex Menzies – has been releasing work far more visceral and sophisticated than that of people twice his age. His sound is rooted in sinewy experimental techno, and can be heard in full on effect on devastating dancefloor 12″s for Vakant and Soma, as well as the more expansive, nuanced LPs Incommunicado and Paradolia, and of course his club-quaking live sets as well.

Having long harboured an interest in minimalism and modern classical composition, Menzies got the opportunity to remix Steve Reich in 2006, acquitting himself beautifully, and more recently has been working with the renowned Scottish Ensemble on a piece called Kinesis. This month sees the release of Lux, his third studio album, and his boldest offering yet. Though techno is still very much in its blood, Lux is a more structurally odd and exploratory record than its predecessors, disorientingly sensuous and totally unpredictable.

You can get some idea of what to expect of Lux from ‘Ikos’, which Menzies opens his FACT mix with. After a reflective start, it doesn’t take long for our man to reach a gallop, dropping fresh meat from Claro Intelecto, Levon Vincent, MMM (the ubiquitous ‘Nous Sommes MMM’) and Lory D, and trusty steppers from the likes of Floating Points and Zomby. Shackleton, Brinkmann, Steve Pointdexter, Actress and Autechre also feature in what is, quite frankly, a heavy, heavy selection. Enjoy it, and check our Q&A with Alex over the page.

How’s it going, Alex? What’s been interesting or bothering you of late?

“It’s going good thanks…..We’ve just moved to London and bought a house so all that shit to do with moving has been my main preoccupation, and not having a studio. As for bothering me, without being too worthy, Irag and Afghanistan continue to be a never ending travesty…These poor people must hate us. As if bombing the shit out of one of the most ravaged countries on earth could do anything but encourage terrorism. But as long as the economy’s back on track then fuck it, eh?!”

You’ve said that your production approach has changed a lot since making Paradolia. How so?

“Really my overriding aim since the first album has been to combine styles and the things I love into a cohesive whole, and in the last few years that’s expanded to focus more on combing the technical with the musical. So I’ve spent a lot of the last few years learning Max and Kyma and working on my production, as well as writing more for classical instruments….I love to be learning something new so it’s all just one long learning process really. Incommunicado was written when I was going clubbing all the time and was full of all the ideas I had running through my head. Paradolia was written quite soon after so shared a lot of common ground with the first one, but was definitely more influenced by the minimal producers I was listening to most. This one has had time to mature a bit so i expect it to be less immediate but have better longevity…fingers crossed.”

Lux is less obviously rooted in techno dynamics and structures than your past work; was it a conscious decision to move away from that idiom…?

“I just wanted to return to the time when I made whatever came into my head and I didn’t think to myself, ‘Oh I wish that snare sounded more like Luciano’ – although that’s maybe a wee bit of an exaggeration! I just wrote whatever came out and the best stuff went on the album, although I can still admit to a pressure to include techno/dancefloor tracks.”

What were you listening to around the time you were making the album?

“I guess there’s a combination of things which definitely influenced it…..stuff like Burning Star Core, William Basinski, Autechre and all the classical music that I grew up with like Bach, Tallis, Mozart.”

Why did you decide to start Hum+Haw? Has running the label been a steep learning curve?

“I just wanted to release my music, working with a friend and be in control of everything from the design to the execution. Honestly, I was a little naive…it’s tough, very tough – and I’m a shite self-publicist so we’ve learned on the job. But we’ve finally got the album out so that’s a start!  ”

“I just wanted to release my music, working with a friend and be in control of everything from the design to the execution.”

Tell us about ‘Akesis’ and your work with the Scottish Ensemble…

Definitely the most exciting thing for me in the last four years. I was really terrified at the first performance. Really terrified. The ensemble are world class and when I told my mum she just said ‘They’re really good…are you sure you’re up to it?’ Nice one mum. But they’ve performed it a few times now and I’ve made a few alterations to it in places where I thought it was a bit weak. I’ll be working with the ensemble again for the next thing I’m doing which is a semi classical/semi weirdo score for the silent film Faust.

We gather you’ve been developing your live sets with new hardware. Can you tell us a bit about what to expect?

“I’m now using a drum machine MPC-style to play more of the beats, and another synth which handles various other duties, as well as singing a bit. I’m working my way up to a proper live set-up with the Nord modular and maybe even Kyma, but probably only when I can travel by train.”

It’s literally just a selection of the music that’s been exciting me recently, and there’s been plenty of it. People are starting to push against genre-expectations a bit more and that’s very healthy. I was meant to include more of my own stuff, but like I said I’m a shite self-publicist and other people’s stuff is more appealing. ”