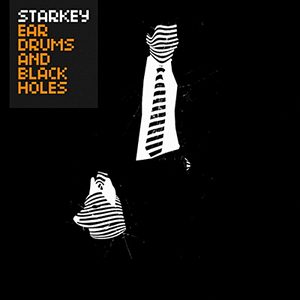 Somewhere at the crossroads between grime, dubstep and dirty south club bangers sits Philadelphia’s Starkey, holding a sign that reads ‘Street Bass’ and directing listeners down roads they may not even know existed before. Just over a year or so since his debut album, he returns to Planet Mu with Ear Drums and Black Holes, a sophomore LP that builds on his ever-growing reputation among bass music circles as a producer with a flair for catchy melodies, arrangements and big, rolling basslines that rattle chests and walls alike. But while his recognisable productions and energetic DJ sets have continued to cement said reputation, pulling off a full-length dance music album is never easy and even less so when it’s the second album milestone.

Starkey has been a favourite of mine over the last few years, primarily for his rather excellent dancefloor-minded singles like ‘Gutter Music’, ‘Miracles’ and ‘Ok Luv’ (the latter of which features on this new album but minus the Badness vocal, which is a damn shame). There is little doubt that he is a talented producer who’s managed to carve out his own sound amid the standardized dubstep/grime/bass music templates that have flooded the market in the last few years. And being that Philadelphia is far removed from the music’s London roots, his approach has always been that much fresher and interesting as he took his sound where few others had trodden previously.

While Ear Drums and Black Holes perfectly exemplifies Starkey’s unique take on the sound, and how it’s evolved, it’s also this very quality that hinders the music in an album format. After all 15 tracks is a long time especially when you’re dealing with music that’s often primarily built for big systems and dancefloors. It’s not all bad though, far from it, it’s just that Ear Drums and Black Holes could have been shorter and in the process a lot more powerful.

The album’s five vocal tracks are by far the stand-out cuts, over-shadowing the rest and making them feel somewhat like padding – quality padding, but padding nonetheless. These vocal tracks are where Starkey really shows his production flair and an ear for catchy hooks and arrangements by bringing in diverse vocalists and giving them each something perfectly fitted to their voices and styles. Rappers Buddy Leezle and Vortex come correct on low-slung, grinding club joints ‘Murderous Words’ and ‘Club Games’ while P-Money makes ‘Numb’ a grime number worthy of the charts. It’s the two female-vocalist-led tracks that steal the show however, primarily by contrasting against the album’s more energetic tracks. ‘Stars’ featuring Anneka is a beautifully atmospheric, floating pop ride and ‘New Cities’ featuring Kiki Hitomi a synth-led, mellow ballad with hints of J-Pop.

Starkey himself actually puts in a few vocal appearances too, brightening up some of the instrumental tracks with vocoded hooks and choruses. ‘Alienstyles’ is perhaps the best example of this, a futuristic ballad carried mainly by his own vocoded, warbling voice singing about getting lost in space.

The fact remains though that despite showing some really impressive variety and quality on the vocal tracks the rest of the album suffers by offering up instrumental tracks primarily aimed at the dancefloor, which don’t really blend in that nicely with the album’s stronger moments. Ear Drums and Black Holes really had the potential for something great but unfortunately falls a little short. Fans of Starkey and his Street Bass style will no doubt find a lot to like in here though, and those weary of dance music albums should still make time for it if only to hear its stand-out moments.