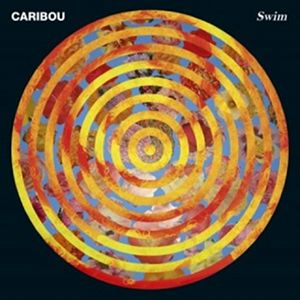 With a PhD in Maths from esteemed seat of learning Imperial College, one might imagine the type of music Dan Snaith makes to be clinical and functional. Not so. Whether under his previous moniker, Manitoba, or as current nom de plume, Caribou, Snaith has always suffused his electronic tone poems with warmth and vibrancy. His creative life’s vocation to humanize electronic music reached a logical conclusion in 2007’s devastatingly good Andorra, which mixed Nuggets retro melodies with a digitally refracted, left-field sensibility.

Snaith’s latest is a different beast though. As such, it’s a testament to its creator’s restless muse and doesn’t set out to appease the psyche heads. You’d never guess that from the opening cut’s title, ‘Odessa’, which smacks of 60s iconoclasm. That it sounds like Phoenix on a budget – tepid unfunk personified – means the album commences somewhat inauspiciously. What Snaith does succeed in doing from the outset is establishing Swim’s sonic tenor – a kind of liquid lysergic delirium or clubbed out, muted rapture.

Swim impresses by judicious use of incongruously meshed elements. The sweeping harps and neo Euro House synth stabs of ‘Bowls’ conspire to create something akin to a found sound facilitated update on Orbital’s Snivilation. On ‘Kali’, Snaith’s breathless Colin Bluntstone impersonation sits atop a rippling, aqueous acid-house groove before a discordant free styling sax gleefully cuts through any sense of E’d universal love. Snaith’s in familiar territory with ‘Lalibela’, evoking dewy eyed nostalgia via hymnal vocalizations. Closer ‘Jamelia’ has all the post-club ennui of long forgotten down-tempo alchemists, The Aloof, before breaking out into something far more joyous and rousing, befitting its status as Swim’s finale.

It’s not entirely successful. ‘Found Out’ pushes Snaith’s vocals to the front and neglects to write a tune in the process but, for the most part, Swim is a laudable effort. Snaith might be operating in a less subtle medium but his melodic guile and delectably nuanced textures remain in tact. Where he goes after this is hard to tell. On the evidence of Swim and past form, Snaith is guaranteed to impress if not enthrall.