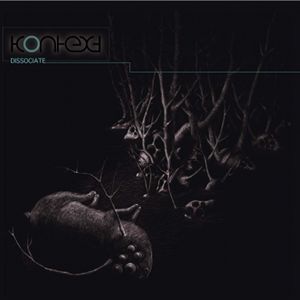 Russian producer Kontext is yet another artist exploring the frequently fruitful dubstep/techno fusion sound, but his spartan minimalism and theatrical ambience sets him apart from more cerebral producers like Ramadanman and Scuba or dancefloor killers like Untold. Making his name with a series of mind-expanding twelves on the Immerse label, Dissociate is Kontext’s second album under this moniker but functions as more of a proper debut, a fresh start after the downtempo ennui of first LP La Dissidence. The title fits as these tracks (about half previously released on twelves for Immerse, the other half exclusive to this release) are both disconnected from the “larger” scene and also from each other. While you’ll hear some familiar rhythmic patterns and huge free-floating basslines, this isn’t your every day dubstep, and some of it isn’t even dubstep at all, experimenting with straight-up techno and ambient.

Dissociate is a starkly beautiful album that stubbornly refuses to acknowledge it; one of those unfriendly albums that finds beauty in adversity, hope in hopelessness. Discarding any notions of accessibility or structure, its obtuse tracks average around the seven-to-eight minute mark, some being almost completely formless and offering nothing convenient to latch onto nor any  touchstones on which to rely. Paradoxically, the album begins with one of its most straightforward tracks, the bleepy ‘Impossible Being’ which sounds a bit like a life support system, heart monitors beeping away, mysterious pistons firing off and defibrillators charging rhythmically. Almost like a robo-Mount Kimbie, the slabs of bass are adorned with microscopic percussion, but it pulses with something undeniably techno – if anything a bit more broken beat than proper dubstep – and its extended ambient midsection pretty much destroys any linear conception of style. ‘Bilinguism’ is appropriately two-dimensional, its rough, metallic extrusions occasionally giving way to stretches of skeletal, bare-essentials desert.

Kontext isn’t satisfied staying within the loosely-defined confines of his own sound, occasionally going off the map entirely, such as on album highlight ‘Plumes’. The track, originally released on Immerse back in 2008, stands out with its 4/4 thump and slow leisurely tempo decorated with dusty glitches and a gorgeous, loping progression. Penultimate track ‘On The Bottom Of The Glass’ throws precedent out the window for seven minutes of droning ambience, zero-gravity percussion ambling aimlessly while huge sheets of bass thunder out a jazzy progression like Shackleton crashing a Miles Davis gig.  But the album isn’t all stoic experimentalism, and sometimes it’s best when Kontext plays to his strengths within a given stylistic template. ‘Clinch’ crackles nicely at 140bpm, the nimble drums sounding much faster than that but the nuclear bass drops and shards of piano giving the track texture and firmly placing it in the dubstep category. ‘Searching For Transcendental’, on the other hand, is pure drum-n-bass, the straightforward breaks erupting fluidly between stretches of ambience, melting into each other to keep from getting completely stale. Those stretches of ambience are really what makes Kontext unique; no matter what tangent he’s on to, there’s always those beautiful glassy drones floating in the backdrop, adding a dense, inescapable solemnity to the proceedings, a gravity that works as much in favour of the album (it’s awfully pretty) as it does against it (it’s awfully serious).

Maybe it’s merely because of that gravity, but to me, this is not an album to dance to, this is an album to get lost in, as cliched as that sounds. These are long tracks that stretch out as far as they want to, and the album is by no means a breezy affair. You get lost by function, not by choice. It certainly didn’t have to be this long; Dissociate could benefit from a few less tracks, especially a few that were already released – ‘Convex Curved Mirrors’ especially feels unnecessary: despite a few engaging moments, its refusal to commit to any one mood feels more like restless hedging than courageous exploration. Other tracks like ‘Aeromonarch Attacks’ and ‘Ocean In The Bathroom’ are just too long, with no significant development or groove to justify their ridiculous lengths. All in all Dissociate feels like a triumph, its few flaws overridden by the collective strength of this icy monolith; this is a confident, assured release by one of the most under-the-surface innovators in bass music. It’s a bit annoying when half the tracks have already been released, but it’s hard to get too upset about it since they weren’t exactly high-profile releases to begin with, and when the tracks are as amazing as ‘Plumes’, who cares how many times they’ve been released anyway. In the ever-widening and nebulous field of dubstep, Kontext has blown yet another hole wide open, just when it seemed like there was no solid ground left to begin with.