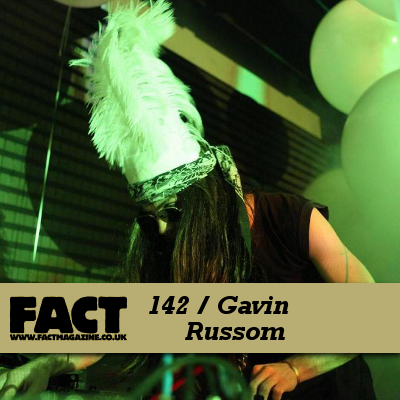 Ever since the FACT mix series began, we’ve been fantasising about hosting one from Gavin Russom.

Today the fantasy becomes speaker-rattling reality, as we present an exclusive and specially-recorded session from the DFA stalwart, synth guru, acid evangelist and all-round good guy. You’ll want to be downloading it as soon as humanly possible.

If you read our recent interview, you’ll know a lot’s been happening in Russom’s world of late. After making his name – and helping build DFA’s estimable reputation – with the uniformly excellent Delia & Gavin and Black Leotard Front records, the artist and producer spent a few years in Berlin, honing his skills, expanding his mind and breaking cover to deliver the storming Black Meteoric Star 12″s and album. Representing Russom’s intuitive, open-ended take on acid house and techno, the Black Meteoric Star project has since been retired, but its focussing of dancefloor energy undoubtedly informs his latest venture, The Crystal Ark. Inspired first and foremost by the wealth of South American music that Russom absorbed on his travels there, not to mention his enduring love of tear-out Belgian rave from the early 90s, The Crystal Ark has already released one excellent single on DFA (‘The City Never Sleeps’), with more to follow along with a live show of some shape or form.

Now based back in New York, acid remains a focal interest for Russom, and one of his most bold and mind-warping remixes to date appeared last week on Carlos Giffoni’s essential No Fun Acid 12″. It would be an exaggeration to say that acid courses through the veins of his FACT mix, but it’s true that tough, psychedelic house and techno sounds abound – from the grinding NY warehouse sounds of Levon Vincent and DJ Qu to the dubwise techno of Peter Van Hoesen and grandstanding Detroit architecture of Vince Watson. But there are plenty of curveballs as well – most notably a track taken from Steve Halpern’s 1983 new age wig-out Spectrum Suite , which recalls Russom’s stately, kosmische-influenced collaborations with Delia Gonzalez, and the gorgeous downtown disco from Diamond Vampires’ ‘Friday Nights’.

2010 looks set to be another vintage year for Russom: as well as The Crystal Ark, there’s a new Delia & Gavin 12″ dropping soon, and he’s also now a part of LCD Soundsystem, having built some custom synth-rigs for the band’s This Is Happening LP and imminent world tour.