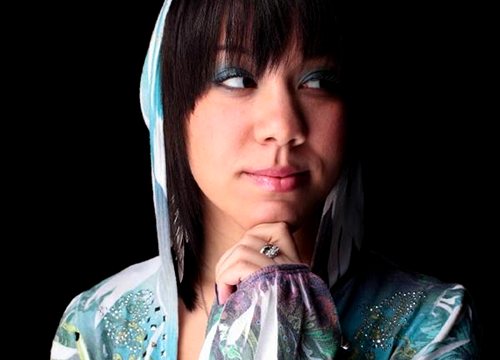 Kyla, the Huntingdon, Cambridge gal behind what is quite possibly the best British pop song of the last decade, ‘Do You Mind’, is back with a new single.

‘Do You Mind’ was originally a bassline house track produced by Paleface, but it was remixed into an end of the night pop anthem by Crazy Cousins (of whom Paleface is also a member – er, we think. This always seems to change) and released in 2008. It was the undisputed anthem of UK Funky’s emergence as London’s big new sound that summer, but really, ‘Do You Mind”s appeal spreads way beyond Funky, and way beyond London – it’s simply a timeless masterpiece, and in retrospect should have been our number one track of that year (it actually finished the poll at number two). It was also Jamie from the xx’s ringtone.

Anyway, after the quiet but perfectly good follow-up, ‘Daydreaming’, Kyla’s back again with ‘Don’t Play With My Heart’. We can’t bring you the whole song, but you can hear enough to make a judgment at this Behind the Scenes clip below, courtesy of Paleface’s Northern Line label (who we presume will be releasing the track).

‘Don’t Play’ sounds more R’n’B-ish than ‘Do You Mind’, with a thudding bassline and some really dodgy backing dancers, and be warned: there’s plenty of breeze being talked in the video below. Still, we’re all about those twinkling synths that come up on the chorus.

Expect ‘Don’t Play With My Heart’ to see release in time for summer.