Serena-Maneesh: Abyss in B Minor 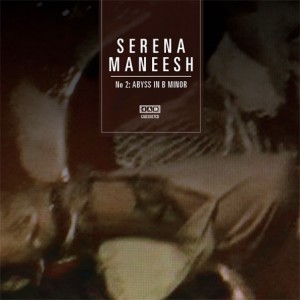 Out of all chaos, order will appear. Every occurrence can be traced back to the minutest of initial actions. Could the same be true in a record? Serena-Maneesh’s second album Abyss in B Minor is a good start. This is not noise for the sake of noise; this is noise with a purpose in mind. Musical chaos with order waiting to be found within it.

It is a melting ice sheet of an album; at times solid, at times fluid, at times slush. It moves and progresses slowly, dripping and shifting, crumbling and cracking, losing more and more solidity into the ocean of noise, becoming less corporeal as the songs progress. And like a huge sheet of ice slowly melting into the sea, it is beautiful and encapsulating but troubling.

At times (such as track ‘Magdalena (Symphony #8)’) Abyss sounds like Goldfrapp when they were in that nu-lounge phase, at others (such as ‘Honeyjinx’) My Bloody Valentine make an appearance, as they are wont to do. The shortest song on the album, ‘D.I.W.S.W.T.T.D’, sounds like The Vaselines would if they recorded in a cave in Norway, as S-M did. The production is staggering; there is always much more going on than what initially seems to be the case. Odd bursts of guitar and loops of noise drift across the surface; songs end in beautiful little codas of loops, skittering off into the distance, melancholy afterthoughts trailing after the noise and bluster of the track. The percussion is complex and layered, anchoring the strands of guitar and vocals. Out of this sludgy, fuzzy mess, a cohesive rhythm and message appears. You begin to learn Serena-Maneesh’s weird, private language through immersion in their icy waters. It’s like Battles but good. [cue comment box mayhem – Ed]

Like in Burial’s stuff, out of the mist lunge strains of beautiful pop moments. Repeated lyrics echo throughout Abyss‘s songs – “I know how you feel”, “Come on let me know”, “You are my sun, you are my morning” – like shadows and ghosts of standard pop music, all sung in this beautiful, monotonous, accent-less voice. The feminine vocals are bright and sunny, but it’s not a case of juxtaposition with the noisy music. The music is in fact the perfect complement. This sounds like an album where everything happens for a reason, and nothing could be any different. The vocals and the guitars just form a single, swirling mass of energy. Despite the noise, the album is really an album of whispers. Every instrument and vocal line plays an incredibly small part in a much greater mass of noise, all struggling to be heard. It takes time and repeated listens to hear all of the whispers.

If the album is a melting ice sheet, then we can never be a part of it. It’s too other-worldly and inhospitable to be a major part of our lives. We’re just paying it a visit, to observe how beautiful and dangerous but essentially fragile it all is, only to then leave and head back to greener pastures, safe and warm again. That’s right. We’re David Cameron.