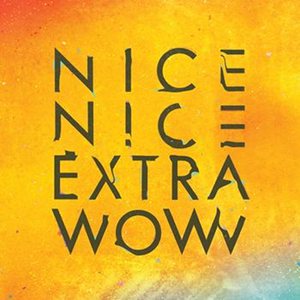 There’s something about the hyperbole of the title of Nice Nice’s first album for Warp that’s entirely fitting. Extra Wow? Surely wow is enough? That extra transforms a spontaneous expression of awe into something more studied, controlled and self-conscious. Which is why it’s a pretty neat fit. Not since No Age have two guys produced such a disproportionate noise out of guitar, drums and an armoury of loops and effects. Yet there’s precision at play here: opening salvo ‘Set and Setting’ sees a thread of psychedelic guitar pulled into a knotty tangle of thickset percussion, the FX-laden scree continuing to build until the wave crashes into second track ‘One Hit’, hallucinogenic colours spilling like blood over the track’s lumpen, stomping beat. Early on it appears that respite is provided through tempo shifts, a sudden stylistic turn with the foot on the gas – hold tight or fall to your death. Extra wow indeed.

Yet, this hyperkinetic opening surge isn’t maintained through the album, as the giant multiple orgasm drops off to a plateau, where the album’s finer, exotic details become more defined amongst the sonic rubble. ‘Away We Glow’ sees chirruping bird song and the tinkle of chimes emerge from a molasses-thick chug of tribalistic clutter, while on ‘Big Bounce’ a mutant, skanking beat undulates beneath a mesh of effects while distant, heavily treated vocals waft above like expulsions from Panda Bear’s dreams. But it’s on ‘See Waves’ that Nice Nice prove that they can channel their intensity into something more structured, the African percussion and synth squiggles uniting over a shuffling beat markedly reminiscent of what Warp labelmates Battles do so well.

Essentially though, Nice Nice are defined by their palpable hunger for a broad range of influences, an enthusiasm that in practice can feel heavy handed. Nobody really needs ‘A Vibration”s unreconstructed Krautrock pastiche, heralding as it does the second half of the album’s descent into nostalgia, where backwards guitar and Eastern musical accents are king. Shorn of its raw power and its stream of consciousness flow, Extra Wow starts to seem over-thought to the point that it almost becomes an exercise in trite mood music, self conscious and forgettable. Nobody needs an extra wow.