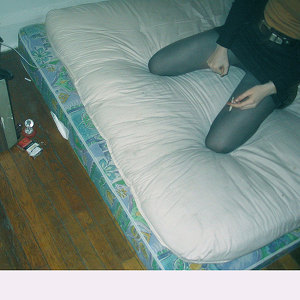 “We are named after She-Ra’s home – we play rough.”

As a statement of intent, the one belonging to Toronto’s Crystal Castles is hard to beat. The anarchic electro-punks burst blood vessels when they first emerged in 2006, like an infant pulled out backwards from a wirey womb. Their first full length veered from unhinged digital thrash to silkier, more svelte dance floor based-business of ‘Crimewave’ and ‘Air Wars’.

Since then, Ethan Kath and Alice Glass, the pair at Crystal Castle’s black heart, have resolutely adhered to their DIY aesthetic and kept the hoods up, garnering as much acclaim as disdain for the confrontational dancefloor rage they peddle. Some cite them as genius nihilist noise mongers, pummeling the corpse of new rave through the grave and into a different electronic dimension. Some of us pine for their sounds to be smoothed with more melody – basically hook us up with a tune.

New single ‘Doe Deer’ will do nothing to unite the two sides. Culled from the forthcoming second Crystal Castles album (again self-titled), this single, released to celebrate Record Store Day, is more a visceral force than an actual song. Full of distortion, big drums and hyperactive electronic twitching, it’s akin to the squeals of a robot in its death throes, desperately attempting to turn itself off, and it’s almost a relief when it crashes to a halt after barely two minutes of aural pounding. Die-hards will be chuffed that Crystal Castles remain so difficult to love, others will continue to yearn for something less prickly.