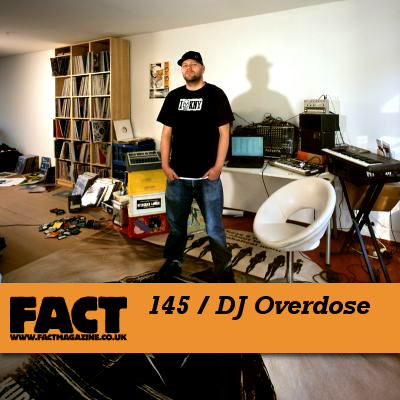 DJ Overdose probably isn’t a familiar name to most of you, but it bloody well ought to be.

FACT was first introduced to this veteran purveyor of electro, hip-hop and Miami bass (his collection of the latter is world-renowned) through When I Sold My Soul To The Machine, a brilliant documentary about the Hague electronic music scene centered around I-f, Legowelt, Bunker Records, Syncom Data et al (be sure to check it out on YouTube).

Obsessed with hip-hop from the off, Grandmaster Flash’s ‘The Message’ and Freeze Force’s ‘Boogie Down Bronx’ inspired Overdose to take up DJing aged 16, and he went on to produce beats for local Hague rappers. His first release to generate real interest outside of the Netherlands was the ‘Trust Me’ 12″, which came out on I-f’s Murder Capital label in 2002; it was followed in 2007 with his biggest record to date, ‘The Beat’. Most recently came the far moodier, more introspective and soundtrack-influenced In For The Kill LP, released on Danny Wolfers’ Strange Life label last year.

As well as his solo productions, Overdose is engaged in a number of collaborative projects, most notably Novamen (with Mr Pauli) and The Hasbeens (with Alden Tyrell) – both have a strong italo flavour to them, though our man claims not to own a single italo record. We’re particularly into the Hasbeens gear: check out the none-more-uplifting (albeit pretty sardonic) Clone cut ‘Keep Fooling Yourself’ here, it’s an absolute barn-stormer.

Overdose’s mix was recorded 100% live and exclusively for FACT, a hip-hop-biased take on the WBMX sound featuring tracks from the likes of Daniel Sofer, 2 Live Crew, Shannon, Geto Boys and Ice-T. Get into it, and read the interview with our selector over the page.

“This mix came out close to why I chose to use the name DJ Overdose – music-wise I can be like a happy puppy going overboard, letting people here 10 tracks I made in two minutes or playing 100 records for only five seconds each. I was playing hip-hop records for myself one day and wanted to play those in the mix and a few days laters I was playing some electro and wanted to add that too, so i just divided the thing into two parts and made it a little longer than usual.”

Obviously hip-hop is at the heart of everything you do. When/how did your relationship with the music begin? What are the hip-hop records that have been most enduringly influential on you and your work?

“It got introduced to hip-hop when I was 12 or 13 years old and immediately I was sold: Captain rock, Twilight 22, Man Parrish, Grandmaster Flash were the first I had on tape – I played that tape to death and had to copy it loads of times because tapes would get eaten a lot. In terms of most influential, I guess the first wave stuff I just mentioned and then Mantronix, Stetsasonic, Just Ice, BDP, Jungle Brothers and from then on almost everything until the first stuff that I really disliked – when the music got too jazzy and rapping went a bit silly and happy; I always liked rapping about the grimey side of life (‘The Message’) and bragging and boasting raps like in ‘Gangster of Hip-Hop’ by Just Ice.

But what really blew me away was Schoolly D: the beats, the scratching, the humour, the two-note basslines. Schoolly D’s first album is so empty but so full at the same time. It’s still one of my favorite records ever (later Too Short came out with Born To Mack which is kind of similar in a way – one synth, an 808, endless rapping and a mediocre scratch DJ that still rocks.) Philadelphia has gotta be a pretty crazy place, hip-hop from there is the roughest around: Schoolly D, Steady B, Skinny Boys, Tuff Crew, Krown Rulers all made the hardcore stuff from new york sound like happy rap.”

“I really disliked when hip-hop music got too jazzy and rapping went a bit silly and happy. I always liked rapping about the grimey side of life…”

The Hasbeens project is quite italo-flavoured, but I remember reading somewhere that you don’t listen to much italo. Is that true? What is your relationship to italo?

“I don’t own one italo record and never play italo at home, but I do like it a lot, it’s cheerful and full of sounds I like to hear. But to me ‘Ain’t The Same As Before’ is like some hybrid of italo and hip-hop, it’s too dark to be italo and too straight on to be hip-hop. I could imagine ghostface ripping it up though, the lyrics we stole from Dr Dre’s ‘The Watcher’ track.

“Also I think Pauli, Technician, Alden [Tyrell] and me influence each other a lot and we all like the same stuff to a degree, but Technician and me hang more to the electro and Miami bass side and Tyrell and Pauli to the more musical italo, hi-NRG, disco sound. So when me and Alden got together we didn’t want to do electro together or the disco we were producing seperately either, but some sort of other thing with other ways of working to get there. It turned out pretty cool but like with all our joint projects we all do together we are lazy in getting in the studio, we still all work best alone at our own homes and music-making appointments turn into just hanging out a lot.”

How did you first meet and come to work with I-f, Danny Wolfers and the other Hotmix-orbiting guys?

“Mr Pauli and me were in primary school together; we’ve been friends since age 10. Technician I met on the tram when he was going to some hip-hop jam in full gear and I asked him where he was going, went along, and we’ve been friends ever since. Alden Tyrell I met through him, one of the rappers from Technician’s group went to school with Alden and he became their second beatmaker; they used to practice at some shitty place in the Hague where we all went and acted silly and played the music as loud as possible. Later I met I-f at his shop and Legowelt got booked on the small parties me and Technician DJ’d at – so we played a lot together on local things.”

“It’s weird how all of us are soundtrack freaks…I think maybe because the soundtracks are so to the point and instrumental, you can’t sing how you feel, you need to play it and say it with the sounds.”

Your recent Strange Life 12″ was quite downbeat, quite murky. Less obviously hip-hop-derived, and more soundtrack-style (very Strange Life in fact). What was the inspiration behind this record?

“Ha, but that’s just the intro and the outro – the rest is hip-hop. But yeah, it’s weird how all of us are soundtrack freaks, I think maybe because the soundtracks are so to the point and instrumental, you can’t sing how you feel, you need to play it and say it with the sounds.

“In the case of the In For The Kill record I just put tracks together I had made before like I always do, the tracks were at Danny’s for a long time so I made ‘Mossad Commando’ and ‘Face Down In The River’ while the rest were resting on the shelf, I let Danny hear them and other tracks got scrapped to be replaced by those. The only track I really made with the record in mind is ‘Face Down In The River’  because I wanted a closer/outro.

“With In For The Kill I meant I do what I do for the doing not for gain, so I was a killer who killed for the kill, not for the ransom – something like that. In the video I made shit go full circle, I get the job done, fly to some sunny resort but end up back at the crossroads where it all started again to do what I do because I can not not do it, kill.”

Tell us about Novamen. What’s that project about?

“When i met Ferenc I thought now here’s maybe an outlet for me and Ingmar (Pauli) to do what we really love: ‘electro stuff’. Ingmar was already making records and enjoying it but he wanted to make electro too, I was always making tracks but never finishing anything – I  don’t think I’d made a whole song with structures and stuff until we did the Novamen record. Ingmar is a musician and all I did was make beats and that was it. So together we made electro songs. We played out in Birmingham last week and had a blast; it was some sort of Lee Perry delay mayhem and freaky space effects triggering freakfest electro jam.”

“Yes, I am a real fan of Miami bass, I love that stuff, I guess it’s about drive and the percussion and bass, I never cared about the rappers not being the best rappers around…”

You’re a real fan/collector of Miami bass, right? How did you first get into that music, and what are your favourite Miami jams?

“I guess because I used to check almost anything at the local record stores back then, I didn’t sub-categorise any of the hip-hop, it was just all hip-hop. NY, LA, Miami bass, electro – it was all the same…beats with rapping over it.”

“But yes I am a real fan of Miami bass, I love that stuff, I guess it’s about drive and the percussion and bass, I never cared about the rappers not being the best rappers around – though some are decent, it’s even more about the beats in Miami bass and of course the full use of the SP12. The sequencing is insane on that machine, it’s the tightest ever, no drumroll sounds better than a SP12 drumroll and being able to tune the 808’s sounds is the best, I had an 808 but I never got into it like the SP12, no tuning hard putting different timing in one pattern – so I traded it for another (in better shape) SP12.

What do use to produce? Are you a gear freak at all?

“A pair of Technics SL1200 mk2, a pair of EMU SP12, Ensoniq EPS16PLUS, Roland TR-606, Korg Poly-800, Roland JX3P, Korg Microkorg, Cubase SX3 and two boss delay reverb pedals and a flanger pedal I dont know the name off cause it’ s not on there anymore. I have a Spirit mixer, some huge thing which sounds kind of nice, and i bought a Simmons trixer a few weeks ago – a drumcomputer trigger mixer thingamagingy. I like gear but I only love the sp12, I think.”

What are you working on the moment? Any future projects that you can tell us about?

“I’m working on an EP/LP for Creme records and a Dream Disco 12″ for a new starting label from Delft and on another 100 random songs which I end up making while trying to make something for those records which end up coming out as something different.”