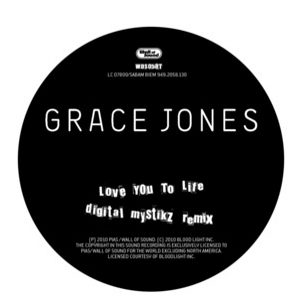 Available on: Wall of Sound 12″

Taken from Grace Jones’ 2009 album Hurricane, ‘Love You To Life’ gets the South London treatment courtesy of Digital Mystikz. Despite coming under the Mystikz moniker I’m pretty sure this is a Mala production, and it definitely has all the hallmarks of what makes his, and the DMZ, sound so unique and appealing. Add to this the fact that Mala hasn’t officially released anything since DMZ012 (aside from his contribution to Hyperdub’s 5 compilation) and you’ve got something many fans, including myself, have been fiending for.

Starting with an atmospheric build up before unleashing some seriously energetic, “eyes-down-skanking” drums combined with a smooth and hugging bass line the track continues to build, adding various elements into the mix before reaching midway and bringing in Jones’ ominous-sounding vocals. As she “calls all the guards” over a solo-ed bass the track drops back into its energetic shuffle for the second half, continuing to bring with it the kind of energy that has now become a trademark of many Mala productions.

To be honest words can’t really describe or do justice to this track, and neither will a headphone session. Just buy it and play it loud, or better yet go hear it on a system with your body soaked in sub – as it was no doubt intended to be heard. There’s only a 1000 copies made though so best be quick on the buying front. It’s great to see Mala Mystikz being given such a high profile remix job and even greater to finally get some more music from him ahead of the much anticipated Return II Space release later this year on DMZ.