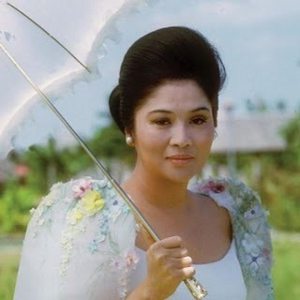 This was a brilliant idea for an album. Here Lies Love is a concept album about former Philippine first lady Imelda Marcos and her nanny Estrella Campus, and the trajectory of their lives as Imelda rose from obscurity to the nation’s beauty, then to fall from grace, being lifted by U.S marines from her mansion as crowds of angry protesters ran through it, discovering her 3,000 pairs of shoes. Byrne and Fatboy Slim wrote the songs, and invited over twenty singers to contribute vocals. It’s the most ambitious thing David Byrne’s done since The Knee Plays.

The record features blissfully conventional pop music. It’s cheap, tawdry disco used to express the story of Imelda through generic lyrics and real quotations from her, and the two are hard to distinguish, which puts paid to the argument that pop songs aren’t real life.

Stand-out points include Florence Welch’s spectacular opening title track (‘Here Lies Love’ is what Imelda wants carved on her gravestone) and Cyndi Lauper’s ‘Eleven Days’, a tale of café courtship, with that distorted voice ricocheting all around; the first song to really express the joy of being alive as Imelda begins to grow. Camille’s ‘Pretty Face’ is the most recognisably Byrnesque tune, featuring the lyrics “1, 000 day care centres, schools and dams and cars / 2, 000 miles of concrete, a centre for the arts” which, when sung in this detached, romantic way, could have come straight out of Buildings and Food-era Talking Heads.

Standard pop messages blend worryingly well with pop propaganda lyrics, such as on ‘Don’t You Agree?’ when Imelda, through the voice of Roisin Murphy, sings “Sometimes we need a hero / Can’t make it on our own / Sometimes you need a strong man / When things are out of control.” These are good pop lyrics that wouldn’t be questioned on any ordinary song, but in this context the singer is asking for the re-election of a near fascist president, and this kind of argument is later used to bring in emergency powers for President Marcos. Clean, superficially typical pop that’s clever and quasi-political; it’s David Byrne alright.

The album makes the great point that pop music represents the events of our lives. It isn’t what we turn to, or what arises from, our experiences, it is our experiences. When you’re feeling excited and youthful, Cyndi Lauper is you, and when you’re wide-eyed and hopeful, you are Martha Wainwright. Pop is an arena of personalities, and the album is a showcase of all the variety that this contains. Candi Payne, Tori Amos, Santigold, Steve Earle, Sia – all taking us into the moods and feelings they’ve spent their careers expressing, like a Victorian variety show (of which modern pop video channels are the contemporary equivalent, you could say). It’s so awe-inspiring that Byrne’s entrance as a vocalist towards the end actually feels a little unwelcome.

Here Lies Love‘s masterstroke comes in the fact that, unlike in classical operas, where things go wrong towards the end of the story and the music becomes troubled and stormy, these songs just become even more serene. As the country falls apart around Imelda, we just become more and more lost in beauty. As she tries to avoid what she’s been associated with, the music turns even more saccharine and irresistible, carrying us away from reality. The album is both a testament to and a warning about pop’s ability to totally transport us from our surroundings. It’s been critically panned because its genius lies in its unoriginality; it’s a homage to conventional pop, and how its homogenous, all-encompassing nature can lift us up high, but also be used to soundtrack even the most brutal of events without skipping a beat. It may be Byrne’s last truly great work, and it’s already tragically underappreciated.