Matthew Herbert: One One 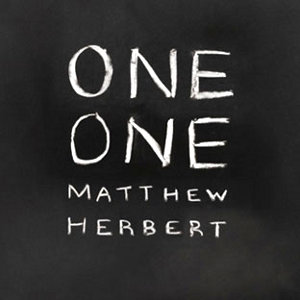 Having spent the last five years concentrating on his Big Band project, by its very nature a communal and extroverted affair, Matthew Herbert goes solo and turns inward for One One, the first album in a projected trilogy for 2010.

Entirely self-played and self-recorded, One One finds Herbert eschewing the flamboyant and politically resonant sampling strategies that have defined most of his recent work (Big Band or otherwise), and, perhaps even more significantly, foregrounds his own frail singing voice throughout its ten tracks.

On songs like ‘Milan’ and lead single ‘Leipzig’, the virtuoso producer – like a slightly less august Robert Wyatt – makes a virtue of his voice’s weakness. ‘Milan’ in particular is a masterful pop miniature: led by quietly insistent junkyard percussion and a four-note keyboard motif of almost balletic daintiness, Herbert overdubs his falsetto into yearning, swirling harmony, accented with controlled blasts of static and no small amount of music-box twinkle. If the rest of the record was as confident and well-judged as this, we’d be talking about the best album of the year. ‘Leipzig’, which tells the tale of a night out gone awry, is tremulous, geeky electro-funk in the vein of Hot Chip,

The dewy-eyed vocal layering, echo-stretched guitars and shanty-like pace of ‘Singapore’ made me think of Jim O’Rourke’s Eureka, and affirms an obvious but easily forgotten fact: though frequently (lazily) filed as an “electronic” artist, Herbert’s command of acoustics and capturing events in sonic space is his real forte. Hearing this strenuously honed skill applied to One One’s minimalist instrumental configurations is a deeply rewarding experience.

However, after the exuberant coda of ‘Dublin’ – somewhere between Graceland and The Chap – things begin to drag. The skittering IDM pop of ‘Palm Springs’ is smothered by its own cleverness, and despite their detail and delicacy, ‘Berlin’ and ‘Porto’ feel like mere sketches, their melodies infirm and forgettable.  Closing track ‘Valencia’ is a worthy closer though, Herbert’s louche vocal and the expansive synthesizer and guitar landscape it wonders through reminding me of Spiritualized’s Jason Pierce hymning a particularly good score.

The way Herbert has positioned One One suggests it’s a closed work, that this flirtation with “singer / songwriter” mode is just that – a flirtation, a one-off (the second and third parts of the One trilogy are built around sounds sourced from, respectively, the denizens of Frankfurt’s Robert-Johnson night club and a pig farmed for the slaughter). Which is a shame, because this album – though beset with flaws and at times a little bit dull – really feels like the start of something special.