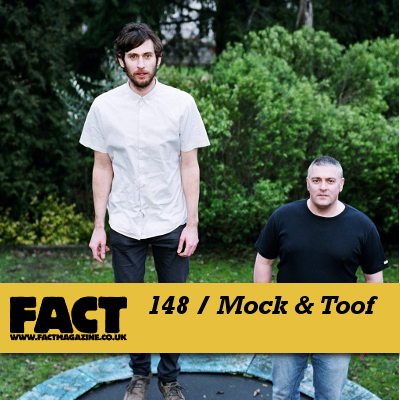 FACT mix 148 is a thing of joy and wonder sculpted by Mock & Toof.

We first profiled this British duo – real names Duncan Stump and Nick Woolfson – back in October 2006, after they caught our ears, and those of DJs and dancefloors around the world, with a cheeky edit of Madonna (‘Lycra Virgin’). The duo had already been on our radar for some time before that, thanks to the good work of their Tiny Sticks label. Founded in ’05, Tiny Sticks presented, and continues to present, an open-minded but clear-sighted vision of dancefloor quality, exploring the grey areas between house, disco and techno with releases from the likes of Mihoacan, Dondolo and Cage & Aviary.

In the meantime, Mock & Toof have continued to grow in stature as producers, with releases not only on Tiny Sticks but also DFA’s Death From Abroad, Mule Musiq and more recently their own bespoke M&T Inc imprint, as well as high-profile remixes for Friendly Fires, Hot Chip, Maps and The Juan Maclean, among others. This month they finally get round to releasing their debut full-length album, Tuning Echoes.

“We’ve never been about ‘nu-disco’, whatever that means anyway,” says Duncan, AKA Mock. “Anyone who knows our music will know that we’re a bit all over the place as producers, if we like an idea we run with it and we’re much more comfortable being eclectic and not pigeonholed. Hopefully the album will help us in our quest for non-categorisation…”

Those of you who have heard lead single ‘Farewell To Wendo’ (check the Trevor Jackson-directed video here), will have an idea of what to expect; Munich-based singer/songwriter Pollyester figures prominently throughout the album, lending a preternatural pop focus to proceedings. And unlike so many albums that emanate from the house/disco sphere, with Tuning Echoes you sense a real effort has gone into the composition and arrangement of the songs, giving them substance, character and longevity, and making them so much more than mere “tracks”. The five year wait has been worth it.

Mock & Toof’s FACT mix captures perfectly where their heads are at: a delightful, time-compressing mesh of electronic futurism and disco archaeology, unerringly grooving and melodic. Only here will you hear Archie Shepp’s ‘Song for Mozambique’ making nice with Autechre’s spaced-out remix of Tortoise, or Cashmere’s boogie bomb ‘Do It Anyway You Wanna’ segueing into Burger/Ink’s glistening Kompakt reverie ‘Milk & Honey’.