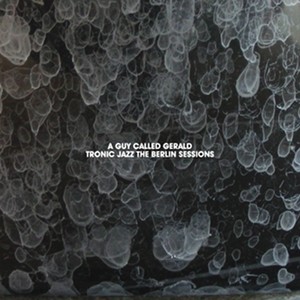 Considering techno (and electronic music in general)’s obsession with the new and especially the futuristic, it’s bewildering to realize how backward-looking it really is, occasionally amounting to sheer idolatry in terms of reverence for its heroes.  Perhaps even more surprising is how long these “heroes” keep going, redefining themselves time and time again and some even staying on top of the field; check impressive new LPs this year from Thomas Fehlmann and Robert Hood for proof. Gerald Simpson is undoubtedly one of these heroes, helping to define Acid House with 808 State and his own ‘Voodoo Ray’, and in the early nineties helping to establish jungle as a proper musical force with landmark LPs 28 Gun Bad Boy and Black Secret Technology, burying himself in the new sound and getting lost in its frenetic breakbeats.  Since the triumph of Technology (recently re-issued to warm welcome), Simpson has been a bit unpredictable, releasing a vocal LP in Essence before suddenly diving straight back into analogue techno with 2006’s odd Proto Acid: The Berlin Sessions. Tronic Jazz is his first LP since, released with the same “Berlin Sessions” subtitle, and it’s a little confounding.

You don’t have to look very hard to find Simpson talking about his music and his move back into techno; a desire for alternate reality dance music untouched by nineties musical history and the advent of all-digital production. The concept is a fascinating mix of reverent nostalgia and that same unbridled, uncompromising futurism, but the result is strangely tepid. It’s pretty, it’s well-executed, but in the end it’s just kind of boring. I can’t help going back to a simple comment made by a colleague in reference to the album: “it’s solid, you know, but it doesn’t feel vital.”  I can’t really sum it up better than that; what we’ve got here is a decent LP full of functional techno cuts, but with all their edges sanded off and all their textures blunted into a blurred, soft-focused blob. The tracks float by pleasantly, staying within the same relaxed tempo bracket; if nothing else, this is an album you can put on in the background and enjoy. “Coffee house” techno then. Even the relatively aggressive tracks like ‘Indi Vibe’, ‘Flutter’ and ‘Wow Yheah’ won’t make too much of an impact on their surroundings.

It’s in those slightly more lively tracks where the album’s beating heart resides, too faint and gentle to even detect elsewhere. ‘Flutter’ is probably the LP’s best moment, combining high-frequency squeaks and bleeps with a dank, cycling bass riff – vintage stuff with a modern touch. ‘Indi Vibe’ recalls the driving energy of Gerald’s past acid house work, later directly referenced by ‘Pacific Samba’, a gorgeous house track decorated with little bits of glitter and confetti. Honestly, it’s more fan service than anything else, pretty but not substantive, while the vintage-sounding string epic ‘Conclusion F Min’ is similarly airy and thin.  The “vitality” problem rears its head several times, despite these more rousing moments: ‘Iland’ is jazzy and breezy to the point of tedium, the dull grey of ‘Wow Yheah’ is interrupted by lifeless vocal samples, and tracks like opener ‘People Moover’ are merely average: hardly memorable and barely getting off the ground.

Tronic Jazz is a frustrating album from an often frustrating artist, one with a remarkable vision and the means to almost pull it all off. It’s hard to say exactly what’s missing here, but with all due respect (and there’s a lot due) Gerald fails to rise above his peers with this release, releasing a mostly unremarkable LP at a time when older producers need to fight with their lives to stay relevant. Diehard fans of Gerald will find much here to make them feel at home, and it will at least pique the interest of analogue fetishists and those stuck in the past, or an idealized idea of the past. Simpson may be a one-of-a-kind producer, and his work still demands attention, but it’s reaching the point where he can’t keep that attention for longer than a few minutes.