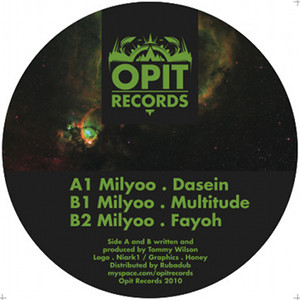 Subeena’s new label OPIT gets its second release out quick with a three-track EP from Kentuckian newcomer Milyoo, whose tracks are peculiar and don’t sit well with any sort of generification; their woozy bounce almost too airy and hollow to even be dance music. ‘Dasein’ starts off with tape hiss and industrial rattling noises before busting out a droning bell refrain, a series of chimes held perpetually aloft by a considerably drafty upwind, floating and ebbing softly in an understated melody. Things get claustrophobic quickly with suffocating drums, as deep basslines and blustery snippets of vocals prod and push the main riff, batting it back and forth. It borders on cacophony but the feeling is more powerful than maddening; it’s not something traditionally danceable but it’ll get people moving, even if they just start having seizures.

The other tracks have different objectives; the atmospheric, piano-driven ‘Fayoh’ fakes soothing ambience before the metal starts clanging, a robotic perversion of UK funky’s obsession with wooden percussion, as the piano obliviously plinks away, calming tones pooling into discordant puddles. ‘Multitude’ is preoccupied with low-end lurch, a ticking downward beat offset by more chopped vocals: it’s a humid track with a clouded-over atmosphere, as the vocal samples close the distance between the surface and the approaching storm. But Milyoo isn’t out to scare people: fleeting Guido-esque strings and fuzzy synth lines are the brief breaks of light through this cloudy grey, until the clouds finally dissipate, the bass drops out and Milyoo leaves us with a single sustained tone of pure sunlight.

Milyoo makes his debut with an auspiciously unique sound made up of elements we’re all familiar with – skittering percussive patterns, looming bass lines, snippets of vocals – but the way he uses them is remarkably idiosyncratic. The vocals aren’t just dehumanized noises, they carry a distinct power – you can feel their breath closing in on you, it’s all part of the effect. He’s not too fond of space, loading his productions up with as much as he can; here’s hoping he can find a way to expand on this intriguing release.