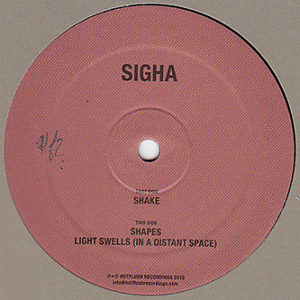 The music of London producer Sigha has always felt incongruous with its surroundings, too laid back and dubby to fit in with British techno, but certainly not dubstep either with its stubborn 4/4 pulse. With the Shake EP, his first of 2010 and the follow-up to the unfortunately slept on Rawww EP from last year (both on Scuba’s Hotflush Recordings), he mines a more inviting style that could be outright pretty if it had a little meat on its bones.

Made up of tiny, barely audible sounds, Sigha’s techno is clearly influenced by the micro-house and minimal techno that ruled much of the last decade, but he moulds it into a form more fitting to the currently dominant Berlin scene. Where producers such as Shed (under his various white label aliases) construct skeletal tools out of basic elements, the music here is bewilderingly dense and complex, always something sounding off in some distant corner.

The title track rumbles to a start with murmurs and hums until Sigha drops an almost frustratingly simple hi-hat over it, completely dominating the mix and lending the track a stubborn rigidity, forcing the rubbery, wiggly tune upright. With so much going on underneath that hi-hat, it’s hard to tell what’s what beyond the ear-splitting high frequencies — the kick sounds like it’s dancing around every beat, far from the simple thump that might be expected.

The shorter ‘Shapes’ is a quintessential Hotflush tune, a beat built out of curiously organic sounds and strapped with deep, drilling subterranean bass and noises pinging away like echolocation in a dark manmade cavern. The hi-hat is hinted at, teased, but never allowed to fully emerge as Sigha sneakily weaves in more elements until the cavern is transformed into a sweaty, throbbing mess. And still that hi-hat slyly winks as you patiently await for it to finally take flight. But it never does.

It’s the last track that might be a bit of a curveball. The rather dramatically-titled ‘Light Swells (In A Distant Space)’ — the ambient wash that memorably opened Scuba’s mix CD for Ostgut-Ton earlier this year — is a beatless astral soundscape, the world spinning around as it stands stationary. Sigha hasn’t reinvented ambient music, but it’s a gorgeous way to end the EP, staring wide-eyed off into the distance, as deep, relaxing breaths are coaxed in and out. He’s still finding his own sound, but his meshing of London’s bass music and Berlin seems bound to reach that golden ratio eventually, and Shake is just one baby step closer.