The line-up for the Stop Making Sense festival has been announced, with Carl Craig, Juan Atkins and Theo Parrish among the biggest names involved.

The promoters involved are Need2Soul, Süd Electronic, Warm, Allez-Allez, Fantasy Island, Swap-A-Rama, Deviation, Optimo, SubClub, Secretsundaze and Deviation. Oh, and your very own FACT will be hosting a boat party: with us for our sun-dappled bash on the high seas is Kompakt crooner and electronic innovator Matias Aguayo (pictured), bringing the already legendary Buenos Aires street-party vibes of his BumBumBox parties to this divine, little-known corner of the Mediterranean. He’ll be joined by Rebolledo, one of several disco ball-grabbing discoveries that Aguayo has brought to the wider world via his Comeme label. Expect loose-limbed dance music rooted in house, techno and tropical electro, all shot through with an ineffable South American charm and rhythmic flair. The party takes place at 1.30pm-6.30pm on Saturday 4 September, and it’s quite clearly going to be amazing.

“We are delighted to have found such a brilliant spot to put on our first event, combining great weather, excellent value transport + accommodation, superb food & hospitality. The facilities are top notch, the villagers super friendly…and sunshine virtually guaranteed. We couldn’t really have asked for more!”

FACT readers can get a special discount deal on tickets: £60 for three days and nights, plus free entry to the FACT boat party. Flights to Zadar, 20 minutes away from the festival site, are quite reasonably priced. 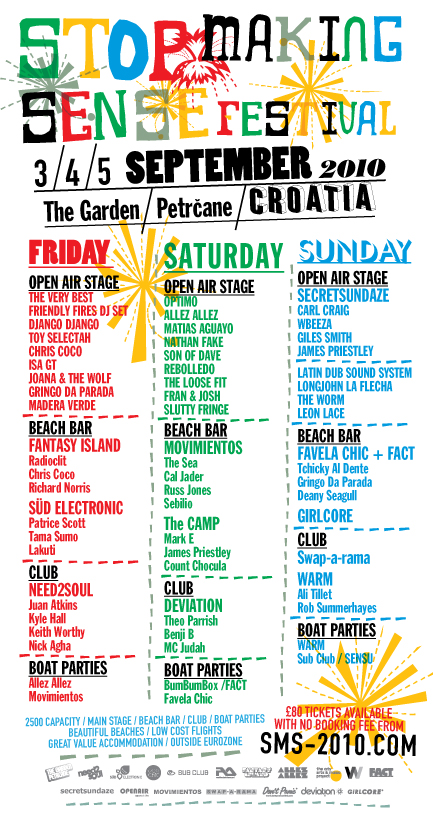