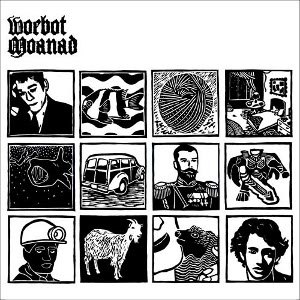 When exactly did the guitar lose its cultural potency? Not since the last evolutionary hurrah of art-rock – around the time of Tortoise’s debut album – have guitars sounded vital and insurrectionary to my ears. Everything thereafter has felt like pastiche, more signifying than significant. Chances are you feel the same. It seems that music’s most creative minds have, in the last 15 years, been drawn less and less to the guitar and the patience-testing band set-up which traditionally encloses it, and have sought instead to make electronic music – desirable not just for its seemingly infinite tonal possibilities, but for the fact that it can be produced and performed alone, autonomously.

Fair enough, I suppose. But isn’t it about time that the guitar was wrestled rom the Topman retro-machismo matrix and made radical, or at least resonant, once again? Is such a rescue or rehabilitation even possible?

With his sophomore album Moanad, Matthew Ingram, AKA Woebot, attempts to re-engage with the guitar and, in his own subtle and subversive way, to locate and uphold the lost art-rock tradition as best he can. In his notes accompanying the release, Ingram – one of the most bold, percipient yet unpretentious music critics that web and print have ever known – summarises the problem, and the mission, thus:

For Ingram the only way to do this was through the use of his trusty MPC sampler. His first, self-titled album, was also a sample-based affair, but Moanad is more purposeful and, as such, more successful. Ingram has spoken of his desire to connect with the “Ur-rhythmic” quality of rock, to create a kind of “stilted boogie”. Opener ‘So Waht’ shows exactly what he means by this: beginning as plangent as Crispy Ambulance’s ‘Simon’s Ghost’, it implodes into Bovellish bass abstraction, before tumbling into a roadhouse stomp that’s about as funky as a Geography teacher on his day off.

To some listeners Moanad will doubtless come across as annoyingly erratic, but there’s a compositional maturity at work throughout, a coherence to its local textures as well as its overall story-arc. Though the main order of business is Ingram chopping once-fluid rock phrasing into eerily lopsided loops, it quickly becomes a more open and unpredictable affair: on ‘Xoc’, sheets of guitar are flattened, filtered and folded so as to resemble the piercing electronic whimsy of  Mount Vernon Arts Club or The Focus Group, while  ‘Spam Tsar’ fires Morse-code hi-hats in the vein of DJ Koze’s ‘Brutalga Square’ across Groundhogsy bass and plaintive analogue synths a la Boards of Canada.

‘The Hook’  feels like the lost soundtrack to Herostratus or some similar swinging London avant-picture – delirious, imagistic and knowingly absurd. I don’t know where Ingram has plucked the Golightly-esque “Sitting in my bedroom late last night” vocal from but it sounds magical, and when the track finally drops – if that’s the word – around 1:58, it’s very arresting indeed. The agreeably wobbly ‘Giochi’ boasts big, wet snare sounds that sound like they’re going to burst into a full-on Amen break at any moment but which instead are kept in check by a baleful cello line and ominous radiophonic drones; ‘Goat’s Wool’ is the album’s most accessible moment, a sweet, methodically iterated ‘I’m not special’ vocal loop riding Hannett-dry drums and C86 six(twelve?)-string jangle. ‘Rat Bat Mite Bite’ is a mere 59 seconds long; with its blend of electric distortion, listless percussion and waspish country twang it’s like the more focussed midget cousin of James Ferraro’s Last American Hero.

Moanad is an excellent, adventurous album, then, but one that would have been even better had it been more alive to, and indulgent of, its own strengths. There are times when it seems Ingram is simply too embarrassed to commit to a groove, or a repetition, or a natural narrative denouement – and in those strenuous efforts to deny his and our expectations he denies Moanad the opportunity to chart the real heights of beauty that it frequently hints at.

Does Woebot reclaim the guitar and redeem art-rock with his sampler? Not in any major way, no. That stated intention quickly becomes secondary to the intelligent, impassioned exercise of his own unique talent, and Moanad is all the more valuable for it.