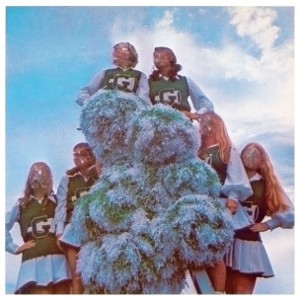 One way of viewing the history of pop music is through the prism of playback technology, from the AM car radios in late 1950s America that shaped Phil Spector’s Wall of Sound, via the ghetto blasters of the 1980s that inspired breakdancing and first wave electro, to the in-car booming systems that show off the low-end of contemporary R’n’B and hip-hop.

Following the techno-logic of such developments, it was perhaps inevitable that a savvy producer would sooner or later deliver an album such as Treats, a recording which seems specifically designed to sound natural to a generation that has grown accustomed to hearing their favourite songs by means of distorted cameraphone footage on Youtube or as tinny, lo-fi mp3s on buses or in classrooms.

Sleigh Bells’ Derek Miller is the man who has crossed that bridge into a musical realm that must be a recording engineer’s nightmare: where clean sounds rub shoulders with signals that clip and M.I.A.-style beats meet overdriven metal/garage guitar. Surfing this sonic maelstrom, vocalist Alexis Krauss delivers lyrics with a sassy high school sensibility, at times pure, at times bratty – the album’s cover image of cheerleaders with their faces distorted fits the contents perfectly.

Album opener ‘Tell ‘Em’ lays down a marker for what’s to follow over the next 32 minutes: massive beats, explosive distortion, serious rock riffage, girly vocals and finger snaps, while ‘Kids’ is pop music for summer days at the beach that no daytime radio scheduler would dare to program, the levels being as red as the sunburned skin of the song’s protagonist.

Although each track on Treats is admirable in isolation, the intensity can become a little wearing when they’re heard back to back. It is noticeable that one of the two outstanding moments on the album comes when Sleigh Bells slow the pace for the anthemic ‘Rill Rill’, distorted piano replacing the guitar as Krauss wonders “what your boyfriend thinks about your braces”.

This downtempo delight provides some cool respite before the album’s crowning glory, ‘Crown on the Ground’, a hugely catchy, hugely distorted dancefloor slayer: imagine Diplo trying to mix chicken scratch funk with Bernard Hermann’s Psycho as a cheerleader chants over the top and the gains are turned to maximum. Intensely immense: expect to hear this after ‘Paper Planes’ at indie discos everywhere.

It says much for the singular vision of Sleigh Bells that the biggest criticism I have of this album is that at times they sound too much like themselves. For a new band to have established an instantly identifiable signature sound within such a short space of time is a great testament to the originality of this duo. The dirty sound of now.