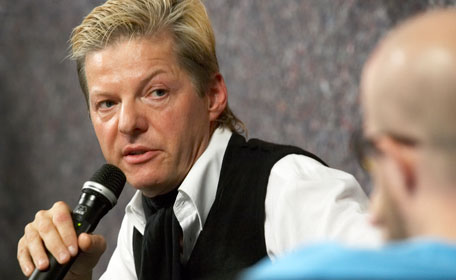 You ever noticed that Wolfgang Voigt looks like a cross between a Bond villain and Pat Sharpe from Funhouse?

Us too, but show some respect – the man’s techno royalty. The co-founder of the Kompakt and Profan labels, Voigt’s also recorded for Warp, Raster-Noton, Force Inc and tons more under thousands (alright, not quite thousands) of aliases – most famously Studio 1 and GAS, under which he released some of the greatest house and techno records of all time.

Voigt has a new album out on the newly resurrected Profan. Titled Freiland Klaviermusik, it’s inspired by the work of Conlon Nancorrow, best known for his high-speed compositions for player-piano. The cover art, described as a “tetrapak painting”, is by Voigt himself. You can download a track from it here.