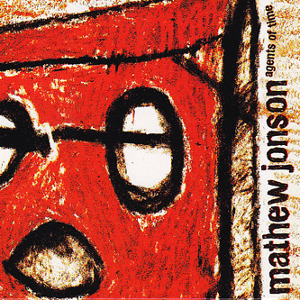 For this, his debut solo album, Mathew Jonson, the Berlin-based Canadian of Cobblestone Jazz renown, appears to have borrowed half the equipment in John Foxx’s studio circa 1980, and at times creates a similarly bleak, dystopian vibe. The opening ‘Love in the Future’, a mournful, windswept Ballardian synthscape that sounds like an analogue woodwind quartet playing downtempo techno, quickly dispels any thoughts that Agents of Time will merely be a series of variations on ‘Return of the Zombie Bikers’ and other past Jonson 12”s of note.

That’s not to say that Jonson is avoiding the dancefloor entirely. ‘Girls Got Rhythm’, the second track on the album, builds a compelling groove around the age old clubbing question, “Feeling Alright?” Midway through, the beat is ambushed by a jazz-funk analogue countermelody, before reasserting itself. As elements of the rhythmic jigsaw are stripped away, what sound like crickets fill the background, though (thankfully) Club Tropicana this ain’t. ‘Thieves in Digital Land’ returns the listener to more contemplative mode, with quizzical bassoon-like electronics and floaty analogue strings over hot, squelchy bass.

‘Night Vision’ also has a touch of the (John) Carpenters with its filmic slow build, repetition and slow fade, while ‘Pirates in the 9th’ sounds even more dark, distressed and downtempo. Both those two tracks and the following ‘New Model Robots’ – all mournful R2-D2 bleeps (like the shadow of the toms on ‘Sunday Disco Romance’), atonal synth washes and truculent programmed drums (more motorik than minimal) – develop a single idea over the course of a piece. Which is not necessarily a criticism – each is very well realised – but if you are looking for great leaps in the course of a single track, look elsewhere.

Yet Jonson’s ability to tease out the limits of a limited palette can work wonders, as demonstrated by Agents of Time’s closing pair of numbers. ‘When Love Feels Like Crying’ sounds superb from the opening note, sparse, dynamic and melancholy, with a melody that never quite resolves and a drum track that is both powerfully propulsive yet held in check. Over the course of 11 minutes, these elements circle each other, the velocity of the notes subtly changing as Jonson highlights different facets in turn, ending with the beautiful, mysterious melody slowly disappearing into the aether.

The title track of Agents of Time is perhaps the most inventive piece on show: a fertile hybrid of vintage analogica and Jonson’s singular take on dubstep, all crunchy drums, sludgy bass and Lando Calrissian synths. Halfway through the track there is a freeform synth solo that startles with its incongruous verbosity: as if Keith Emerson, in a mischievous mood, had broken into Eno’s studio circa 1978 and daubed his aural graffiti all over Music For Films. It’s an evocative end to a largely rewarding listen.