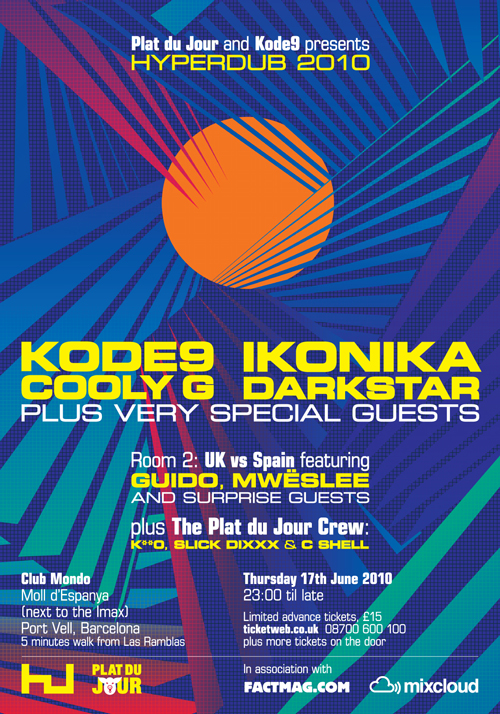 Kode9’s Hyperdub label has spent the last few years receiving stupid levels of acclaim from way beyond the sphere of UK dance music it grew up in – you probably don’t need us to tell you that. This party, at Club Mondo on Barcelona’s Port Vell beach, captures the label at its peak to date of quality, intrigue and acclaim, with the latest chapter in the HBD story Ikonika’s sublime debut album. [Update: oh, and Kode9’s FACT mix.]

Ikonika, one of the UK’s best DJs right now as well as a great recording artist, plays along with label boss Kode9. Cooly G reps the Hyperdub house music splinter group, while Darkstar will bring their brand of heartbroken cyber-pop to the table. There’ll also be some very special guests in attendance.

Room 2 will host a UK vs Spain showcase, with Punch Drunk’s Guido (who himself recently released a debut album) and Arkestra’s Mweslee, plus the Plat du Jour residents.

This party takes place the Thursday of Sonar weekend, on June 17, from 11pm til late. Tickets are already available on ticketweb.co.uk.