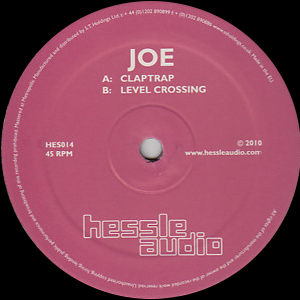 Hessle Audio is a label usually associated with the more leftfield side of modern dance music – most notably on their releases from Untold. But on the label’s latest release, a pair of ultra-minimalist tracks from Joe, strewn with typewriter noises, piano licks, hand claps, bells and breaths, they’ve executed what in theory sounds like a godawful idea.

Joe’s sound seems to sit at some sort of warped crossroads between Soca beats, UK Funky, the monotone dubstep of early 2562 and the mad minimalism of Untold and recently, Ramadanman. This combination drives this loosely conceptual single forward with gusto, giving tracks like ‘Claptrap’ the sort of prickly vitality needed to make a song comprised almost completely from handclaps the rhythm and force to work on dancefloors.

‘Level Crossing’ comes from the same minimalist gene pool as ‘Claptrap’, with bulbous kick drums and remarkable sense of space, but it’s more frequent in its rhythms and incidental noise. Zig-zagging strips of piano appear out of nowhere, cutting through the ever-present rap-rap of what sounds like a typewriter. As the track gradually builds, with subtlety and precision, the arrival of a frantic cowbell is practically rapturous.

Unassumingly named, Joe’s robust sound sports surprising energy considering its starkness. There are few labels bold enough to put out a single like this, but there are even fewer producers who could bring a dancefloor to its knees with only a cowbell and typewriter.