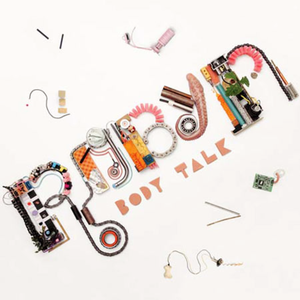 In a whole variety of ways, the magic of pop music lies in its transforming the everyday into something transcendent and dramatic. In a sleight of hand, this almost omnipresent backdrop to our lives, which reflects all the standard desires and fears, also offers an escape out; even if only for three minutes.

Robyn’s one of the most interesting people working in pop music, partly because of how this dichotomy plays out. It is, strangely, easy to forget how massively successful she is – she still comes across as one of us; not the studiously practised we’re-just-totally-normal of, say, Girls Aloud, but in a more unassuming and genuine way. Yet at its best her music is anything but unassuming, relating stories of love and disappointment as massive, poignant epics of the soul.

Body Talk Pt. 1, the first in a planned trilogy of albums, is just slightly more subdued than its predecessor. There’s no immediate stand-outs along the lines of ‘With Every Heartbeat’ and ‘Be Mine’; songs which could make the world stop. The nearest Body Talk comes to that is ‘Dancing On My Own’, which is very nearly as good as you might expect a Robyn song with that title to be – a bruised and aching track for the walk home from the club, with icicles of piano and pillowy synths. Elsewhere, Robyn has fun with quivery, taut electro-house that’s a bit late noughties Get Physical-lite, but nice all the same. She even goes for jittery hedonistic angst on the pop-minimal of ‘Don’t Fucking Tell Me What to Do’ (sample lyric; “My drinking’s killing me”); but compared to some real hedonistic angst – John Tejada’s ‘Paranoia’, for example – it’s pretty slight. Robyn’s just too inherently nice and reasonable to make the darkness stick.

There’s certainly a great deal to enjoy here, from the shiny playground chants of ‘Fembot’ (which suddenly cascades into a dizzyingly great finale of overlapping melodies), or the sweet Swedish folk song which closes the album. But throughout there’s a feeling that Robyn’s holding a little back, and the ultra-condensed tracklisting (a mere eight songs) doesn’t allow for tension or atmosphere to be built up as she hops between moods. Ultimately, she doesn’t hit quite as deep as she did previously.